Despite adding a big piece in the offseason, Cone believes biggest battle will be among themselves in the Philippine Cup 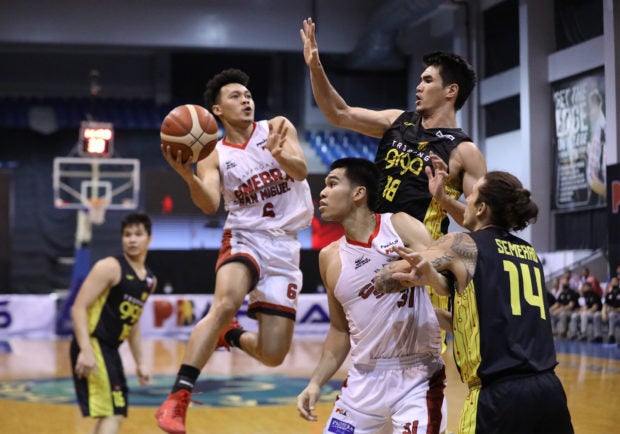 Scottie Thompson (with ball) will continue to play a vital role for Ginebra. —PHOTO COURTESY OF PBA IMAGES

Tim Cone, the multititled Barangay Ginebra coach, said that the most important battle for his Gin Kings in the coming PBA season is one that will be fought among themselves.

“I think it’s going to be our greatest battle—battling expectations,” he told a handful of reporters shortly after he was hailed the Outstanding Coach of the Bubble by the PBA Press Corps on Sunday night.

“Yes, we’re coming off championships, and yes we’ve gotten Christian (Standhardinger) to a team that won a championship without Greg (Slaughter). Yes, on paper we should be competing for a championship. But on paper and being out there on the court are two hugely different things,” he added.It will be in no way a walk in the park, according to the PBA’s winningest coach. That is also why he has begun taking steps, despite the training restrictions and the possibility of an April 9 season opening being pushed to a later date.

Cone’s cautious approach stems from one tale he was able to see up close during their championship run in the 2020 Philippine Cup.

“They came in with these huge expectations and they got off to a slow start and never really recovered,” he added.

The Batang Pier finished with a sorry 1-10 record during the elimination round.

Cone also pointed out that other clubs have managed to improve their rosters.

“You’ve got to remember, there’s a lot of good teams out there,” he said. “San Miguel’s gotten better, Magnolia’s gotten better. TNT, with Chot (Reyes), has certainly gotten better. NLEX getting those third and fourth picks. Meralco’s going to be there, too.”

The Hotshots recently traded for forward Calvin Abueva, while the Beermen, the five-time winners of the all-Filipino title, dealt away several of its players and picks for scoring champion CJ Perez. The Bolts, who nearly beat the Kings during the semifinals, acquired Mac Belo.

“And then [there’s] Phoenix … and Alaska,” added Cone.

If anything, Cone has kind of expected this for the Gin Kings.

“I think that the expectations are going to be even higher for us. We won a couple of conferences in a row, and you know, fans get used to the winning, you know,” he said. INQ

Read Next
DOH-7: No South African variant detected in Central Visayas yet