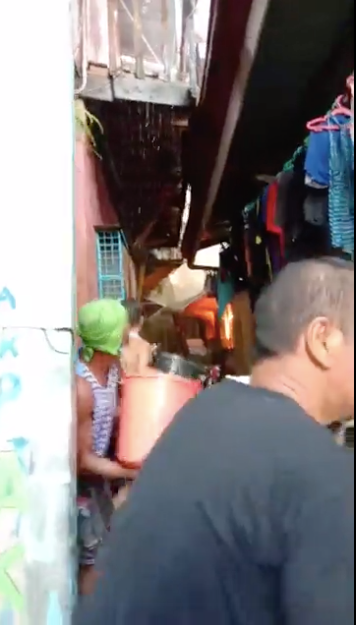 Residents of Barangay Sambag 2 carry pails of water to help firefighters in putting off the fire that hit the densely populated area this afternoon, March 16, 2021.

CEBU CITY, Philippines– At least 50 houses and 1.5 million worth of properties went up in smoke when an afternoon fire hit a densely-populated area in Sitio Kawayan, Barangay Sambag 2 in Cebu City past 3 p.m. today.

The Cebu City Fire Office received the fire alarm at 2:53 p.m. It was raised to 2nd alarm six minutes later. Firefighters declared the fire under control at 3:57 p.m. and it was finally put off at 4:31 p.m.

The fire burned at least 50 houses within the 1,000 square meter area and displaced 100 families including 500 individuals.

According to SFO1 Novo Erana the fire started from the house of a certain Natalia Fernandez.

Erana said electrical fusion could be the possible cause of the fire but this is still under verification as their investigation is still ongoing.

No casualties or injured individuals were reported.

The Sambag 2 blaze is the third fire incident that happened in Cebu City in the last three days.

The first one was reported last Sunday in Lucio Lopez Drive, Barangay Calamba, wherein a storage facility for construction materials and furniture burned down.

Last Monday morning, a least 30 houses were also razed down in Sitio Club Kawayan in Barangay Mambaling, Cebu City with damage to property being pegged at P150,000. /rcg