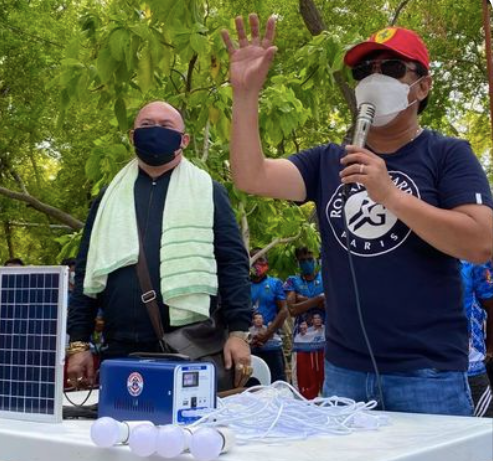 LAPU-LAPU CITY, Philippines- Another islet barangay of Olango Island in Lapu-Lapu City will have their light in their houses after 80 households in Barangay Caohagan received solar panel sets today, March 21, 2021.

Lapu-Lapu City Mayor Junard “Ahong” Chan in a post on his Facebook page said that this was under his “Kahayag mo, Kaugmaon ko” program, since they did not have any electricity yet in the place.

(If before they depend on generators (for their electric supply), candles and gas lamps for their light, now they have their own power supply to light their houses and we made sure that all the households in the island will receive solar panel sets.)

Each solar-panel set comes with four LED lights and a smartphone connector which allows them to charge their mobile phones. Each set costs P9,000.

Aside from this, the city also installed 25 solar-powered street lights on the whole island.

He also said that the budget for the post of the street lights came from his own pocket, while the solar-powered lights were donated by a private donor.

Chan said that after Barangay Caohagan, they would also distribute solar-panel sets to Barangay Caubian, another islet Barangay in Olango, next week.