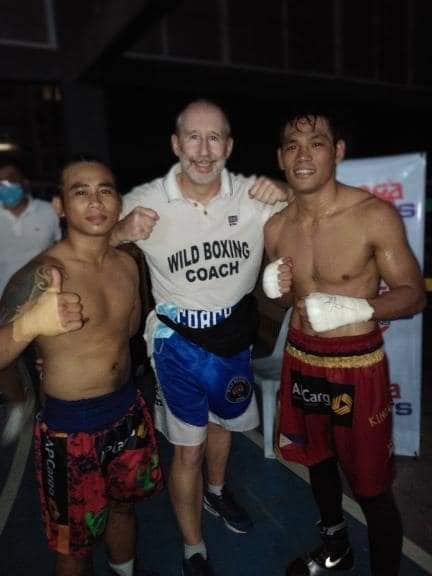 Mark Barriga (left) and Arthur Villanueva (right) get confidence boosting wins at the ‘Kumbati 8 & 9’. John Wild (center), their boxing trainer, poses with them in this photo. | Photo from Arthur Villanueva’s FB account

The 32-year-old Villanueva, a former ALA Boxing Gym stalwart, showcased his old deadly form to walk away with a unanimous decision victory against Bryan Tamayo of Malabon City in their 6-rounder super bantamweight duel.

The 27-year-old Barriga, also an ex-world title challenger, displayed his dominance inside the ring by scoring a lackluster technical knockout (TKO) victory against Jenuel Lacar of Manila in their 6-rounder light flyweight duel.

Villanueva, a proud son of Bago City, Negros Occidental, improved his record to 33 victories with 18 knockouts coupled with four defeats and one draw after defeating an equally determined Tamayo (6-2-2, 2KOs). All three judges at ringside, Edgar Olalo, Reymar Embudo, and Noel Flores, scored the bout, 59-55, all in favor of Villanueva.

He pummeled Tamayo with timely left straights and sneaked in jabs that forced the latter to go on on defense. Villanueva inflected more damage to Tamayo after landing a combination in round two, resulting in a deep cut on the latter’s right eyebrow.

Villanueva continued to sneak in solid punches, which found all their targets in the ensuing rounds to pile up points on the scorecard. Tamayo was downed on the sixth round, but the referee did not rule it as a knockdown, but rather Tamayo only lost his footing while dodging Villanueva’s flurry of punches.

Villanueva already considered retirement in 2020 after losing to Nordin Oubaali for the WBC world bantamweight title in Kazakhstan. However, he proved that he still got what it takes after defeating Tamayo via a unanimous decision.

Back in the winning column

Barriga buried his painful split decision loss in 2018 against Carlos Licona for the IBF world minimumweight title in the United States after beating Lacar (8-7-3,6KOs) via a fourth-round TKO.

Barriga, who competed in the 2012 London Olympics, showcased his slithering defense and accurate counter punches that frustrated Lacar in their short-lived bout. Lacar came out the more aggressive in the first two rounds, but Barriga’s defense was very difficult to dismantle.

Barriga connected most of his punches in the ensuing rounds. Lacar, sensing danger, quit on his stool before the fifth round started awarding Barriga a lackluster TKO victory to improve his record to 10-1-0 (win-loss-draw) with two knockouts.