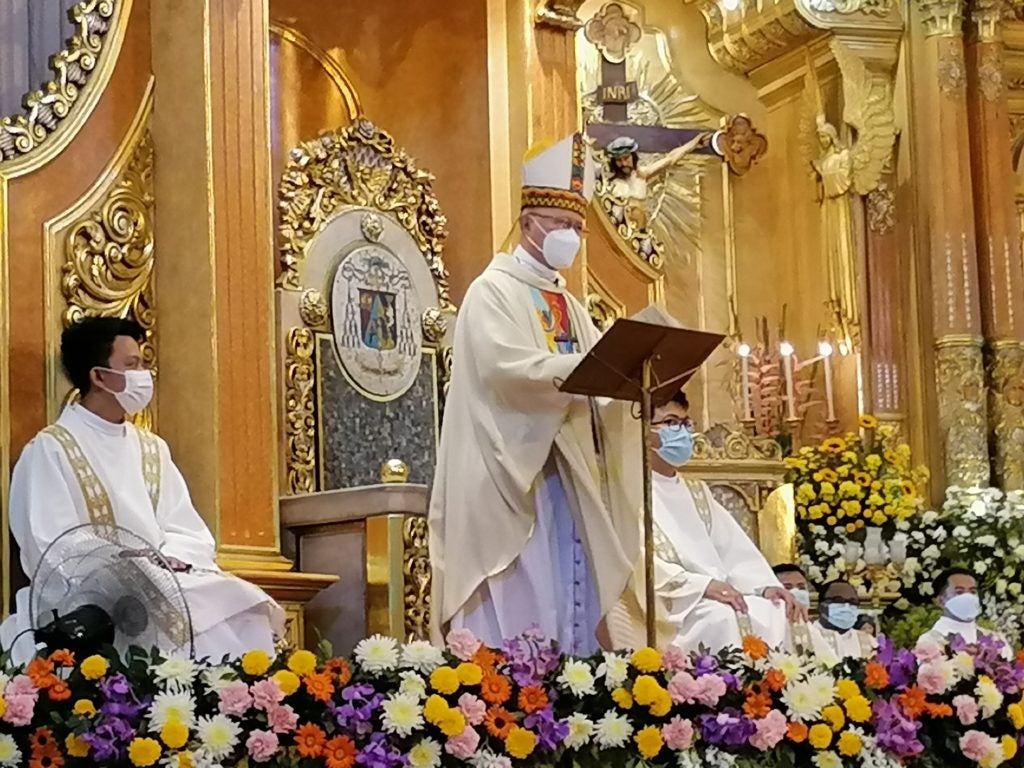 Cebu Archbishop Jose Palma presiding over the Mass for the opening of the 500 YOC celebration on April 4, 2021 at the Cebu Metropolitan Cathedral | CDN Digital / Morexette Marie Erram

CEBU CITY, Philippines – Cebu Archbishop Jose Palma urged Cebuano Catholics to continue to spread the word of God and to share comfort, forgiveness, and love to others.

This was Palma’s message during his Homily in a Mass which he presided in the afternoon of Easter Sunday, April 4, that marked the official start of month-long activities for the Cebu leg of the celebration of the 500 Years of Christianity in the Philippines (500 YOC).

“There are many who are hungry, homeless, lonely, and afraid. Many who long for companions. Yes, we are gifted so that we can bring comfort, forgiveness, and love to others,” Palma said.

“So that the hungry may have some food and the lonely may have some friends. So that those who hunger for God and for His mercy may know that through us, indeed, Jesus has risen and is present in our midst,” he added.

Palma’s Homily message was also in line with “Gifted to Give,” the Archdiocese of Cebu’s theme for the 500 YOC.

The entire island-province of Cebu remains under Modified General Community Quarantine (MGCQ) this April, but local and national officials have allowed the church here to proceed with their planned activities for the 500 YOC albeit in a limited capacity.

On Sunday’s kick-off, dozens of devotees flocked to the Cebu Metropolitan Cathedral to participate and witness the historic event.

The ceremony began with the opening of the Cathedral’s Jubilee Door to mark the start of the Jubilee Year for the quincentenary celebrations of Christianity’s arrival in the country.

A total of 12 other heritage churches in Cebu also simultaneously opened their Jubilee Doors at that time.

Anyone who passes through the Holy Doors, and who recently went to confession, receives Holy Communion, and prays for the intercession of the Holy Father and the Church, will receive plenary indulgence or complete remission of all temporal punishments due to sins.

Palma led the procession into the Jubilee Door and then presided over the Mass wherein church priests and workers also conducted the renewal of baptism.

The event concluded with the unveiling of the Cathedral’s Jubilee Cross, another highlight in line with the 500 YOC.

In an interview, Palma told reporters that he was delighted the event was a success.

“What we have done is being done all over the country. That coordinated celebration is a sign of unity but at the same time, we are aware of the significance of our whole country, the Philippines,” said Palma.

With the 500 YOC celebrations now in full swing, the Archdiocese is also expected to lead the reenactment for the First Baptism which will be held right beside Magellan’s Cross in Plaza Sugbo this April 14 and the blessing of the third Cebu-Mactan bridge.