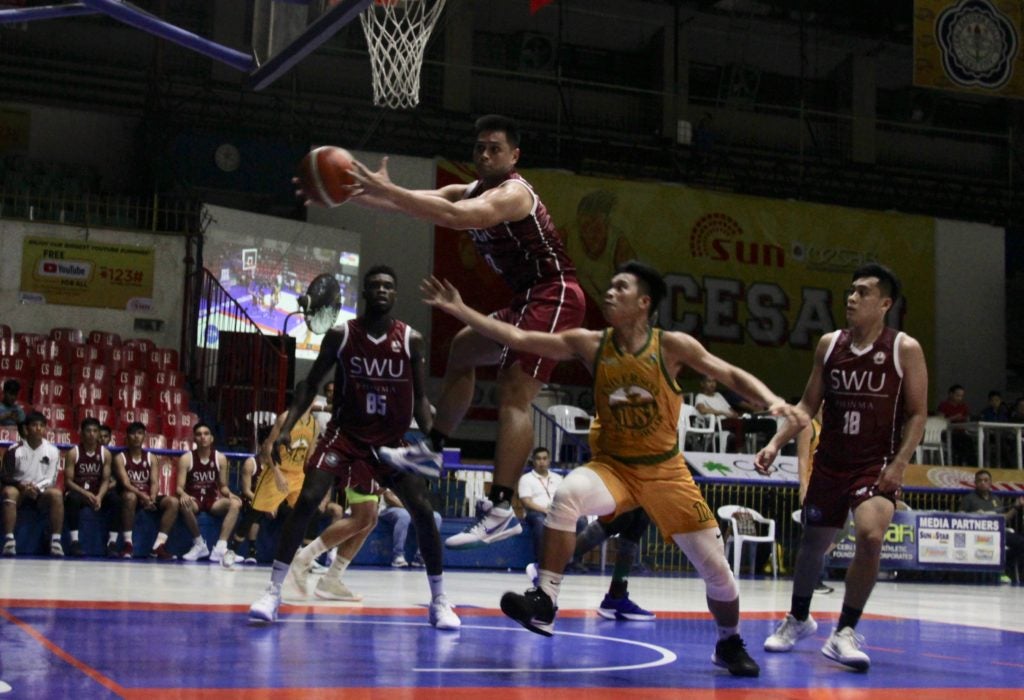 In this October 2019 photo, Red Cachuela of SWU-Phinma grabs a rebound in a game against USC.

CEBU CITY, Philippines—Gritty forward Red Louis Cachuela will be the third player the Southwestern University (SWU)-Phinma Cobras who will be in the roster of the  KCS Mandaue Computer Specialists after he was tapped to join the team competing in the  Pilipinas VisMin Super Cup.

Cachuela’s signing came after the Mandaue City team got affected by the announcement of the  Maharlika Pilipinas Basketball League (MPBL) that those players suiting up for teams in the Super Cup will be considered ex-pros.

One of the team’s players, JR Ongteco, who happens to be also playing for Bicol Volcanoes-LCC Malls in MPBL, immediately backed out after the MPBL announcement on April 1, 2021.

To replace Ongteco, KCS team owner Ricky Verdida and head coach Mike Reyes tapped Cachuela to help them in their campaign inside the bubble that will be held in Alcantara town, southwestern Cebu starting Friday, April 9, 2021.

The 27-year old forward from Cagayan De Oro City said he was initially surprised after Reyes called him to play for the Computer Specialists.

“Without hesitation, I said yes man pud. I am very excited and ready to play for the team as well. The team can expect that I will do my best and do the little things,” said the hardworking forward who played a vital role in SWU-Phinma’s championship run in the 2019 Cesafi season.

The 6-foot-2 forward said he is also confident he can help the team, considering he knows the system of coach Reyes all too well now.

“Since I played for coach Mike sa SWU, coach knows what I’m capable of doing inside the court.”

Cachuela will join his fellow Cobras Shaquille Imperial and Dyll Roncal in the Mandaue City roster.

The three were teammates in the team that won the Cebu Schools Athletic Foundation Inc. (Cesafi) men’s basketball title in 2019 against the powerhouse University of the Visayas (UV) Green Lancers.

Read: Phil Mercader: Watch him rise from the abyss of despair

The Computer Specialists will open their bid in the professional league against the Siquijor Mystics on Friday night, April 9.