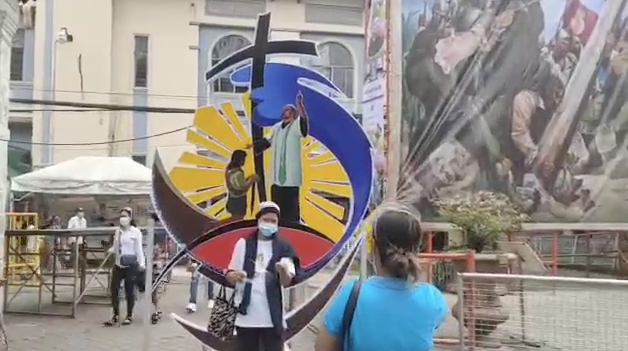 Preparations are ongoing for the 500th anniversary of the first baptism that took place in the country, the reenactment of which will be held on Wednesday, April 14, 2021, at Plaza Sugbo in downtown Cebu City. | Contributed Photo

CEBU CITY, Philippines – Church leaders and local officials in Cebu City welcomed the recent proclamation from the Malacañang declaring April 14, 2021 a Special Non-Working Holiday here to celebrate the 500th anniversary of Christianity’s arrival in the Philippines.

Cebu Archbishop Jose Palma, in a speech during the cultural show Chronos Et Kairos held at Ayala Center Cebu on April 13, thanked the President for issuing such proclamation.

“We are grateful to the President for he has declared that the culminating activities for the 500 YOC (500 Years of Christianity), the day of the 500th anniversary of the First Baptism, as a Holiday in Cebu City. We thank President Rodrigo Duterte for such declaration,” said Palma.

“I thank President Rodrigo Duterte thru the Office of the Executive Secretary Salvador C. Medialdea for the approval of our request. I also want to thank the City Council for their support on our request to declare April 14 a special non-working holiday,” said Labella.

The Palace issued Proclamation No. 1130 on Monday, “Declaring Wednesday, 14 April 2021, A Special (Non-Working) Day in the City of Cebu.”

This stemmed from a resolution authored by Councilor Joel Garganera, seeking to declare April 14, 2021 a special non-working holiday here in time for the celebrations, which the city council also approved.

“In the midst of this pandemic and despite the losses, challenges, and pains that we have endured, this faith kept us moving forward. Thus, not even this pandemic can stop us from celebrating this milestone and declaring our faith all the more, but of course keeping in mind the health and safety of the community first,” Garganera told reporters in a message.

Meanwhile, Labella is reminding the public that Wednesday’s holiday is not an excuse to let their guards down and not follow health protocols.

(But since we’re still in a pandemic, physical activities are still limited. We urge everyone who want to witness the events to do so through live streaming.)