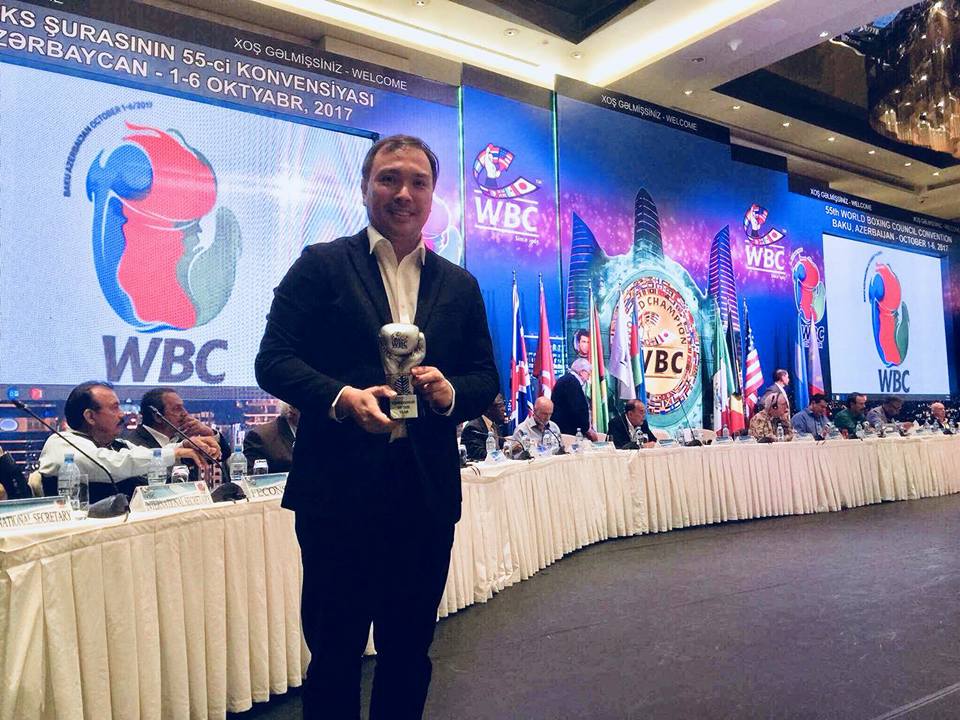 Photo caption: In this 2017 photo, GAB Chairman Abraham Mitra receives his award from the WBC in Azerbaijan. | Photo from WBC website

Mitra, who once served as the chairman of the Oriental and Pacific Boxing Federation (OPBF), was highly-recognized for his achievement in helping the WBC Women’s Convention become an international event in 2014 along with several WBC international events and programs.

“Abraham Mitra’s relentless work and passion for boxing and humanity was fundamental during the difficult times during the pandemic as he lead with example by implementing protocols with the support of The WBC to reopen gymnasiums and to allow boxer to keep activity during the most difficult times,” a post from WBC reads.

For Mitra, it is a great honor for him to get recognized and featured on WBC’s website when he learned about the post.

“It is a great honor to be cited and featured by the WBC. It is the prestigious and world renowned boxing organization. We will strive to add to our active performance and participation,” Mitra told CDN Digital.

He also revealed that he is currently reaching out to Filipino boxing promoters to avail of promoting bouts for the WBC international and WBC youth titles by reducing the sanctioning fees.

This is to help Filipino boxers get quality exposure and rise from the ranks with the hopes of becoming a world champion.

“We have reached out to our promoters to avail of the WBC International and WBC Youth title to help work champions. We have asked for reduction of sanction fees so it can be affordable for our promoters,” added Mitra.

“Even if we are a regulatory body only as sports development is with the PSC (Philippine Sports Commission), we are still trying our best to reach out to the different sponsors to assist our fighters and managers.”

Last February, Cebuano combat sports and trainers and athletes claimed their second tranche of financial aid distributed by GAB from the Assistance to Individuals In Crisis Situation (AICS) program.

Currently, Mitra and the GAB are focusing on their investigation on the controversial game in the Pilipinas VisMin Super Cup held in Alcantara, Cebu involving the Siquijor Mystics and the ARQ Builders Lapu-Lapu City Heroes.