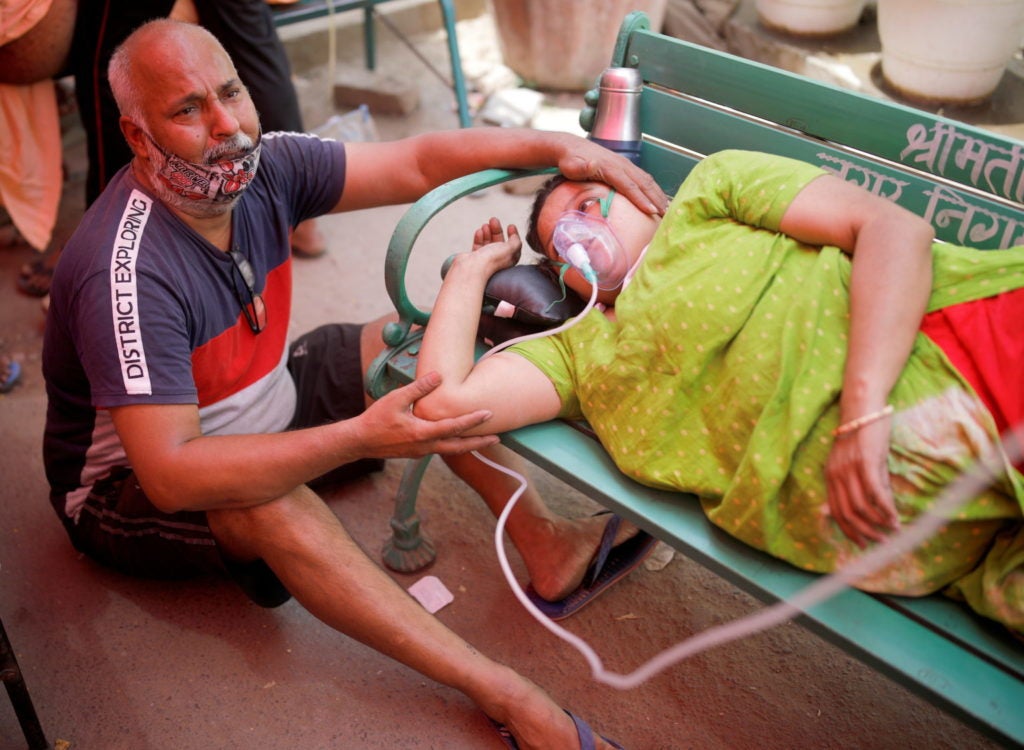 Mukesh Bhardwaj cries as he sits next to his wife, who receives oxygen support for free for people suffering from breathing problems, outside a Gurudwara (Sikh temple), amidst the spread of the coronavirus disease (COVID-19), in Ghaziabad, India, May 3, 2021. REUTERS/Adnan Abidi

NEW DELHI — A court in India’s capital New Delhi has become the last hope for many hospitals struggling to get oxygen for COVID-19 patients as supplies run dangerously short while government officials bicker over who is responsible.

A two-judge bench of the Delhi High Court has been holding almost daily video conferences to hear petitions from hospitals invoking India’s constitutional right to protection of life. Local and federal officials are attending.

The shortage of medical oxygen has plagued the city of 20 million people for about two weeks, with unprecedented scenes of patients dying on hospital beds, in ambulances and in carparks outside, gasping for air.

Delhi is recording about 20,000 new COVID-19 cases a day. As the health system buckles, the city says it needs 976 tonnes of medical oxygen daily, but gets less than 490 tonnes, allocated by the federal government.

Representatives of Prime Minister Narendra Modi’s government, which is managing supplies nationally, have told the court they were doing all that is possible, and blamed the Delhi government, run by a rival party, for politicizing the issue.

The panel of two judges, Vipin Sanghi and Rekha Palli, has heard lawyers for Modi and the local administration spar over oxygen quotas, transport problems and a lack of tankers.

And sometimes, the judges have lost their cool.

Over the weekend, when Delhi state representatives again flagged concerns that oxygen supplies were not arriving in time, putting patients’ lives at risk, Justice Sanghi lashed out at officials, saying the “Water has gone over the head. Enough is enough…enough is enough.”

In late April, Sanghi pulled up government officials, saying they should “beg, borrow, steal or import” oxygen supplies to meet the city’s needs,

He said the state “cannot say ‘We can provide only this much and no more,’ so if people die, let them die.”

Both governments, federal and that of Delhi, are facing criticism for not being adequately prepared for the surge in infections. Since late April, some of the city’s best hospitals have asked the court for help.

“Not only is this unprecedented, but right now this (court) hearing is literally like water is for fish,” said Prabhsahay Kaur, another lawyer who approached the court for a hospital’s oxygen needs and got help.

Still, scenes of desperation, urgency and frustration play out every day.

At one hearing last week, a lawyer for the local government called an oxygen supplier by telephone, putting the call on speaker, to ask why cylinders had not reached one hospital, while the judges patiently listened to the answers.

On Sunday, one lawyer broke into arguments to say his hospital had just one hour of oxygen supplies left, while simultaneously another person pleaded that patients could “start dying” at his facility.

Minutes later, another loud voice said: “One hundred and forty patients. One hour left. We are in trouble … there is a crisis,” as a judge tried to calm the speaker and urged state authorities to take immediate action.

In another exchange, a home ministry official said its officers were working on a war footing and sought the blessings of the court.