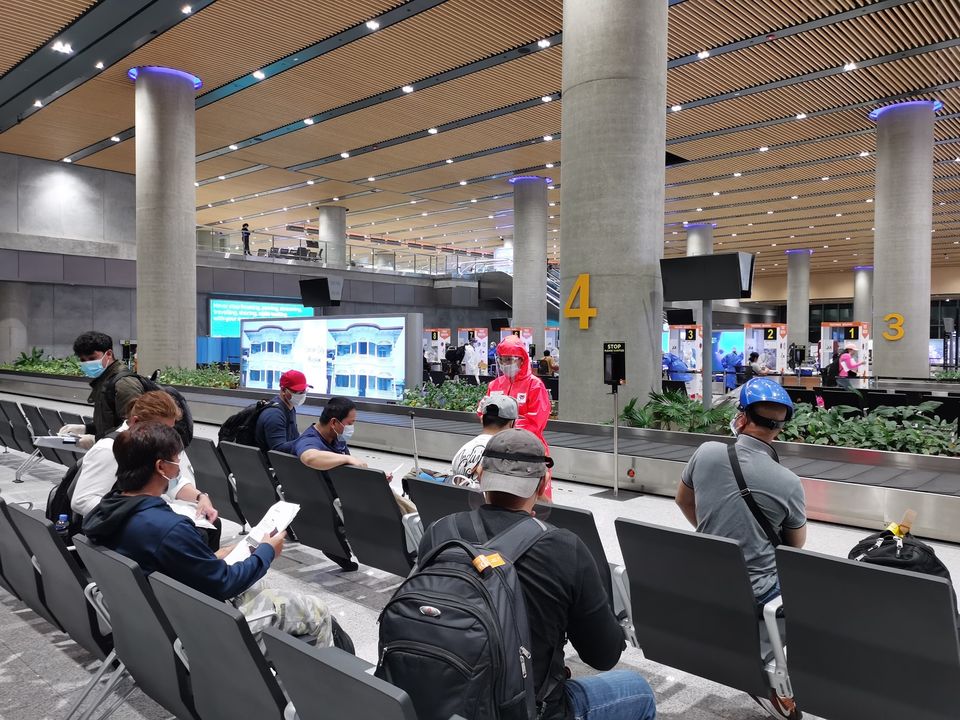 FILE PHOTO: A personnel of the Department of Social Welfare and Development in Central Visayas (DSWD – 7) conducts an orientation for returning OFWs at the Mactan Cebu International Airport (MCIA). | DSWD – 7 photo

“As we inch towards normalcy, it is high time for local government units who handled the pandemic well to return to their driver’s seat and be given full confidence to manage the COVID-19 situation within their respective jurisdictions free of any intrusion by the IATF (Inter-Agency Task Force for the Management of Emerging Infectious Disease),” portions of the two-page manifesto reads.

The manifesto was made to support Cebu province’s ‘innovative’ swab policies for incoming Returning Overseas Filipinos (ROFs) and Overseas Filipino Workers (OFWs), under Executive Order (EO) No. 17, that deviated those mandated by the IATF.

“As representatives of the people of our districts, we are cognizant of our constituent OFWs’ and ROFs’ urgent need to immediately return home to their families to minimize the financial and emotional burden (of) long periods of quarantine entails… we can no longer sit idle while our constituent OFWs and ROFs are further burdened by unsound and impractical policies that greatly ignore their own personal and financial circumstances,” the manifesto said.

“We, therefore, welcome with great appreciation and fully support the innovation of Governor Gwendolyn Garcia and the Provincial Board of Cebu in adopting the Swab-Upon-Arrival Policy that eases the emotional and financial burdens of our constituents OFWs and ROFs. To the IATF, we urge you to respect the rule of law, respect the Philippine Constitution, and respect the local autonomy of the Province of Cebu,” it added.

EO No. 17 was eventually formalized to be part of Cebu province’s local laws when the Provincial Board enacted Ordinance No. 2021 – 04 last May.

It directs all incoming Filipino travellers arriving in Cebu from abroad to be swabbed upon arrival, and stay in designated hotel rooms for a maximum of three days pending their test results.

While they can be released once they test negative, another round of swab test – on the 7th day upon arrival – will be made in compliance of IATF’s policies.

All of these, however, swayed away from the ‘whole-of-nation’ approach the IATF is implementing which requires OFWs and ROFs to be quarantined for 14 days upon their arrival, in which the first 10 days are to be spent in an accredited quarantine facility.

Quarantined travellers will be swabbed only on the 7th day of their arrival.

“Worse, such actuations by the IATF are an encroachment upon the local autonomy enjoyed by the Province of Cebu as enshrined in the Philippine Constitution and under Republic Act No. 7160,” the manifesto pointed out.

Despite several attempts from national government officials to stop its implementation here, Garcia defended her decision by invoking the powers of  local autonomy under the Local Government Code – particularly Section 105.

Section 105 of the Local Government stipulated a limited control for the National Government and supervision and control by the Secretary of Health ‘in cases of epidemics, pestilence, and other widespread public health dangers, the Secretary of Health, may, upon the direction of the President and in consultation with the local government unit concerned, temporarily assume direct supervision and control over health operations in any local government unit for the duration of the emergency, but in no case exceeding a cumulative period of six (6) months’. / dcb