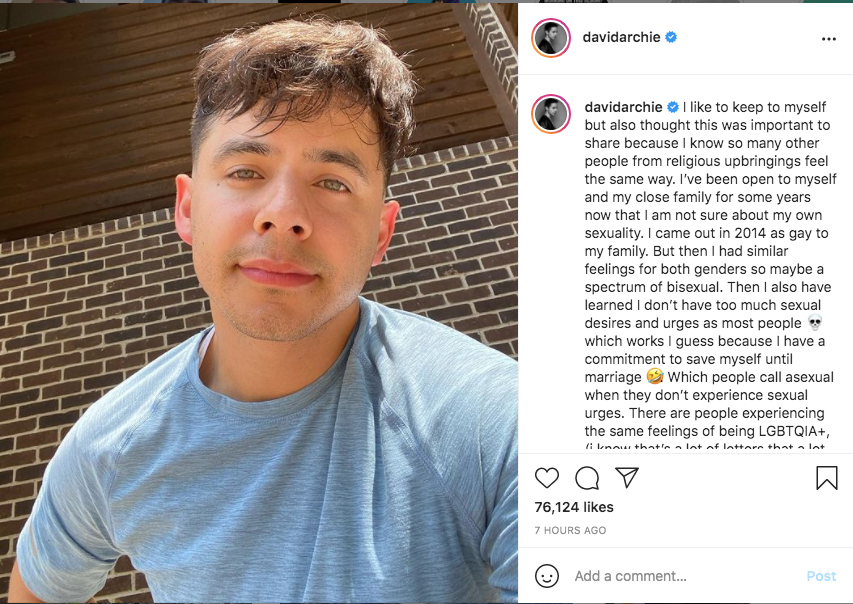 CEBU CITY, Philippines— The “Crush” singer finally shared to the world and his fans one of the things he has been keeping to himself for years in an Instagram and Twitter posts this Sunday, June 13, 2021.

“I like to keep to myself but also thought this was important to share because I know so many other people from religious upbringings feel the same way. I’ve been open to myself and my close family for some years now that I am not sure about my own sexuality. I came out in 2014 as gay to my family,” Archuleta wrote.

But as years pass by he figured that he also may be bisexual for he had similar feelings for both genders.

“Then I also have learned I don’t have too much sexual desires and urges as most people 💀which works I guess because I have a commitment to save myself until marriage 🤣. Which people call asexual when they don’t experience sexual urges,” he added.

For years, the singer and actor said he was okay with keeping his sexuality from the limelight for as long as he has the continued support of his family and close friends.

But in this year’s celebration of Pride Month, he decided to share his story.

“I think we can do better as people of faith and Christians, including Latter-day Saints, to listen more to the wrestle between being LGBTQIA+ and a person of faith…. Again I don’t feel comfortable sharing it, but felt I needed to bring more awareness to people in my same situation and let you know you’re not alone. You can be part of the LGBTQIA+ community and still believe in God and His gospel plan,” he said.

The American Idol star also wanted every closeted member of the LGBTQIA community to know that they are not alone in their battle. / dcb