Swab-Upon-Arrival in Cebu resumes on June 21 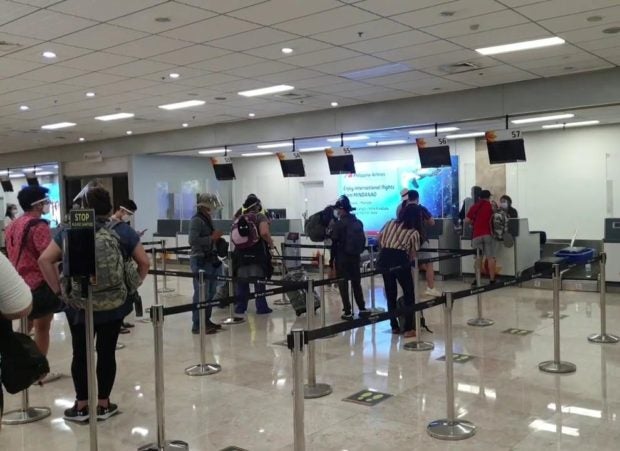 The the Swab-Upon-Arrival policy of the Cebu Provincial government will resume  today, for arriving returning overseas Filipinos and overseas Filipino workers, who will arrive at the Mactan Cebu International Airport. | Inquirer Visayas file photo

CEBU CITY, Philippines — Cebu will continue to implement its Swab-Upon-Arrival rule even after what seemed like another attempt from the national anti-COVID task force to push the province to follow their protocols.

Gov. Gwendolyn Garcia on Monday, June 21, confirmed to reporters during a press conference that the Swab-Upon-Arrival policy was not implemented last June 20.

But after an emergency meeting with concerned government agencies and hoteliers on Monday, Garcia announced that they would immediately resume swabbing Filipino travelers upon their arrival at the Mactan-Cebu International Airport (MCIA).

“Those not swabbed yesterday (June 20) will be swabbed today or tomorrow. If they have negative test results, then they may go home to their respective LGUs (local government units),” said Garcia.

According to the governor, government agencies, hoteliers, and even law enforcers received last June 19 verbal instructions from members of the Inter-Agency Task Force for the Management of Emerging Infectious Diseases (IATF-MEID or IATF) to impose the mandated 14-day quarantine and swab-on-the-7th day rules for arriving Filipinos from overseas.

The directives would run contrary to Provincial Ordinance No. 2021-05 or also known as the Swab-Upon-Arrival policy, prompting authorities to consult the Capitol.

In turn, Garcia called for an emergency meeting on Monday, the outcome of which led her to issue Executive Order (EO) No. 23 to  remind and warn concerned authorities and hotels tasked to accommodate arriving overseas Filipinos that they must abide by the province’s laws.

“Let us be reminded that this is still a government of laws and not of men. And as such, in Cebu, there is an existing ordinance which clearly spells out the Swab-Upon-Arrival protocol,” said Garcia.

IATF Resolution 114, as amended by Resolution No. 116, required arriving Filipinos from abroad to be quarantined for 14 days upon their arrival wherein 10 days are to be spent in an accredited quarantine facility.

They shall only be swabbed for COVID-19 on the seventh day from their arrival.

Last March, Garcia issued Executive Order (EO) No. 17 that would direct all incoming Filipino passengers to be swabbed upon arrival, and should only stay in accredited hotels for a maximum of three days should they test negative of the infection.

It was later known as the province’s Swab-Upon-Arrival policy.

The IATF has been insisting to local officials here to strictly follow their guidelines instead.

Read Next
Violators of Swab-Upon-Arrival rule warned: You may face admin, criminal charges