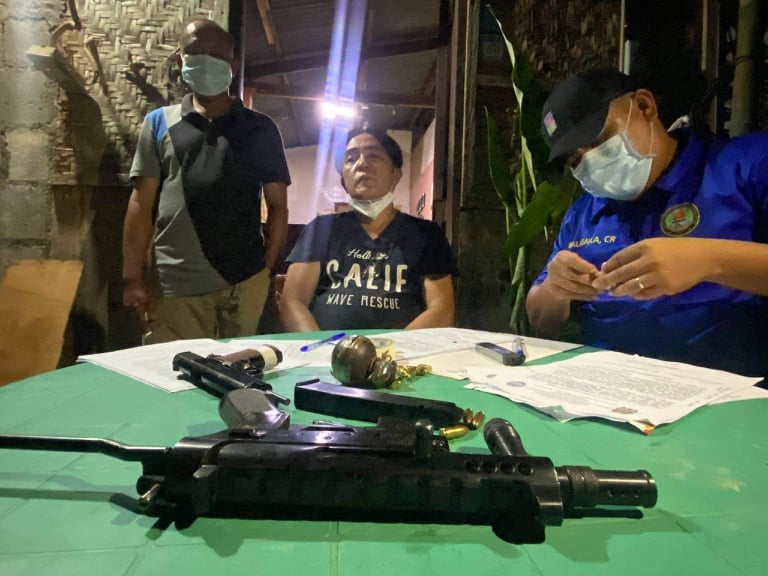 Carmilo Tabada, a barangay councilor in Barangay Poblacion in Bohol, was arrested with a unit of .45 caliber pistol, a piece of 9 mm machine pistol KG9 with live ammunition, a hand grenade, and subversive documents during the joint operation headed by the Criminal Investigation and Detection Group Region 7. | contributed photo

CEBU CITY, Philippines – Members of the United Church of Christ in the Philippines (UCCP) and concerned organizations denounced the arrest and detention of Carmilo Tabada, an incumbent barangay councilor in Bohol, and Pastor Nathaniel Valiente, who were both tagged as members of the TABADA crime group and communist-terrorist group (CTG).

In a virtual press conference on Wednesday afternoon, June 30, 2021, the UCCP, KARAPATAN Central Visayas, Farmers Development Center (FARDEC), along with other organizations, decried the arrest and detention of Tabada and Valiente, saying it was “illegal.”

They are calling for the immediate release of the councilor and pastor, stressing that the search warrant is “illegitimate”, “questionable,” and does not justify the conduct of any arrest.

“On the validity of search warrant, I would like to emphasise that the search warrant is illegitimate, and the search warrant does not justify the conduct of any arrest… naa man silay nakuha para nila mga contraband. It would be brought to the court, ug mag file sila og lain nga kaso sa korte para mag-apply sila og arrest warrant. They have no arrest warrant; therefore, they have no basis to make an arrest,” said Dennis Michael Abarientos, spokesperson of KARAPATAN Central Visayas.

Based on the accounts of Tabada and Valiente families, they clarified that there were search warrants served to them but stressed that these were only showed right after the personnel from the Criminal Investigation and Detection Group (CIDG) barged into their houses.

For his part, Raymundo Gelloagan of the Promotion for Church People’s Response (PCPR), said there was a loophole in the search warrant for Valiente during the operation of the composite team of CIDG, Philippine National Police (PNP), and Armed Forces of the Philippines (AFP) past midnight last Friday, June 25, the same day they barged onto the house of Tabada.

Gelloagan said that based on the accounts of Edna Valiente, the wife of the pastor, the operating team searched the house of her father, instead of theirs.

Edna also expressed her side during the conference, saying that the incident has caused them trauma, stressing that she does not want to see any policeman anymore.

She narrated that before the state forces barged into their house, they went first to the house of her father, where they recovered the alleged pieces of evidence inside the cabinet owned by her late mother.

The operating team allegedly told them to search the house of her father, which Pastor Valiente allowed them to do so since they already barged the area before they went to her house.

The family was surprised to see the firearms, which prompted Edna to go home, but it was then she also found out that the cabinets inside their house were all open as well.

Reportedly, at least three houses owned by the siblings of Tabada were also raided by the operating team before they barged into to his house even without the presence of barangay officials.

Earlier, Maricel Tabada, the niece of Tabada, claimed that pieces of evidence, such as unlicensed firearms with ammunition, a hand grenade, and subversive documents recovered during the operation were also planted, stressing that her daughter saw some personnel putting something under Tabada’s bed.

Tenchavez said they condemn such operations of the state forces questioning them as to why they focus on the red-tagging and running after human rights defenders and peace advocates.

“Instead of attending to the needs of the people who are affected by the pandemic, state forces are concentrating on the red-tagging and running after the human rights defenders and peace advocates. We therefore, call for the immediate release of Pastor Nathaniel and Carmelo Tabada, and to drop all the charges filed against them. Helping the farmers and the fisherfolk is not a crime. Stop persecuting our church. Stop persecuting our farmers and do not harm them,” she added.

Marianne Tagalo, officer-in-charge of the FARDEC, said Tabada had become the subject of series of harassment in 2020 and red-tagging was intensified in 2021, where he was allegedly forced to surrender and accused of acquiring firearms by unidentified persons staging a rally in front of his house in March.

“This is a year manifestation on how state forces terrorizes developmental workers in which they create false narrative and red tagging in order to eliminate repressive organisations or individuals,” said Tagalo.

Gelloagan believed that such charges against the two individuals will be dismissed for the lack of evidence.

The church and organizations concerned considered the incidents as blatant attacks to the church community and farmers.

UCCP further said that “this is a way of silencing the active participation of the church people especially the church worker whose intention was to promote the rights of every individual… where the marginalized and deprived are given equal importance and the statue of the law protects and promotes human rights respect.”

Recently, CIDG-7 denied accusations that their arrest of Tabada was questionable and illegitimate.

Police Colonel Ireneo Dalogdog, regional chief of CIDG-7, said their operation was legitimate because they have a search warrant against Tabada.

Read Next
Losing him 352 km away