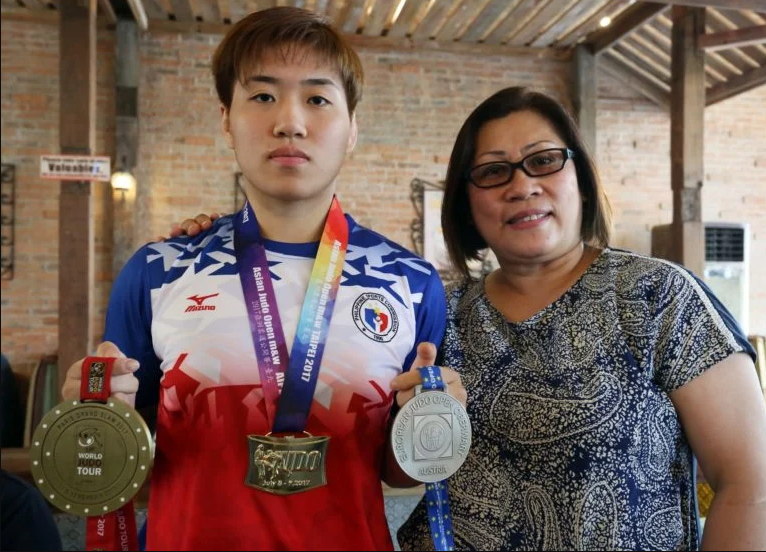 Kiyomi Watanabe (left) and her mom, Irene, during their visit to Cebu in 2017. | CDN File Photo

CEBU CITY, Philippines — Even before Kiyomi Watanabe sets foot on the mat in the biggest competition of her life, her ever-supportive mother, Irene Sarausad, is already very proud of her for reaching the Olympics.

Watanabe, the Cebu City-born Filipino-Japanese judoka, is set to compete against the world’s best in the women’s -63-kilogram division of the Olympics in Tokyo, Japan, on Tuesday.

Irene, in an interview with CDN Digital, said that she has mixed emotions.

(Of course, as a mother, I am at her side since the she started with her Judo. I am very happy but I am a little bit worried because of the competition.)

(If there is the proudest mother, of course, that is me. I am so proud of her especially when it was announced that she is the flag bearer. We were all surprised especially Kiyomi because she was informed hours before the opening.)

The 24-year-old Watanabe dominated the 2019 Southeast Asian Games (SEAG) held in the country. After that, Watanabe went to campaign in several Olympic qualifying tournaments, which earned her the precious slot to the quadrennial sporting spectacle that was moved from 2020 to 2021 due to the COVID-19 pandemic.

(I’m very worried because Kiyomi told me that this Olympics is really a do or die battle. What she means is the competition is really tought. It’s now or never. Also, Kiyomi has injured both her knees because of her matches in the qualifying tournaments.)

(We are happy that the doctor allowed her to compete and her fighting spirit is really really up there. Kiyomi told us that it doesn’t matter if she has injuries, whatever happens her goal is to have a medal. That is where I saw her strong fighting spirit because I am with her everyday.)

Irene also shared that Kiyomi’s father was teary-eyed when he saw her on the television carrying the Philippine flag along with fellow Olympians.

For Irene, her daughter has come a very long way.

(Her progress now is different compared to the time before. Before, we needed to comfort her if she can read negative comments on social media. Now, she her mindset has matured. She has changed her phones so that she can avoid reading negative comments.)

(I told her that the negative comments will always be there. We can’t please everyone. As a mother, I need to motivate her so that she will not be affected by these negative comments. Instead, she will use those as inspiration  to push her to do more.)

Irene said that she is fond of reading negative comments about Kiyomi on social media. For her, it is one way to find out possible lapses or errors in Kiyomi’s performance during competition. But, not all; most attacks are personal and below the belt.

She said that she would be willing to present the birth certificate of Kiyomi to prove that she was born in Cebu.

(We read the negative comments. These were as if pushing us to do better. I already explained to Kiyomi about this. She also understood this.)

Kiyomi faces Spain’s Cristina Cabana Perez in Tuesday’s round of 32 in the women’s -63kg division at the Waseda University in Tokyo, Japan.

Waseda University is where Kiyomi studied and honed her judo skills, giving her the much-needed homecourt advantage.

(Kiyomi is different now compared to before. Despite her injury, she has adjusted well. She now has standing techniques. Her ground techniques are different. She has additional techniques that can really help her.)

Irene’s best motherly advice for her Olympian daughter is to do her best, and regardless of the results, everyone’s already proud of her.

(I talked to her and told her that there are more coming Olympics. Win or lose as long as you gave it your all. No matter the outcome we accept it and accept it. But I know she is mentally and physically prepared.)