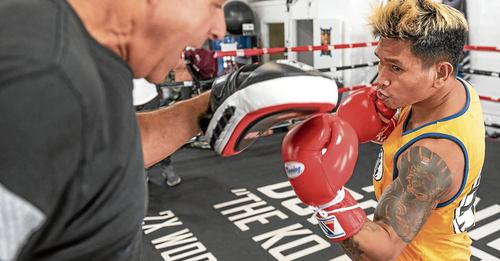 John Riel Casimero made this plea to Guillermo Rigondeux to make their Aug. 14 fight in Carson, California, and interesting one: Fight and engage.

But the Filipino champion of the World Boxing Organization’s bantamweight division—as well as the general public’s—knows all too well it’s not going to happen.

That just isn’t the style of the Cuban former world champ who held an impressive record as an amateur, including two Olympic golds and two World Championships.

In fact, Rigondeux is famous for going against the grain. Rigondeux displayed that flashy hit-and-duck style in spoiling it all for Nonito Donaire in the peak of the Filipino Flash’s career back in 2013.

And by all indications, Rigondeux is expected to use that same method against Casimero’s charging, gung-ho game.“Everyone is talking about Casimero’s power. Nobody is talking about my power. I feel like I’m being under estimated,” Rigondeux told boxingscene.com.True, despite his defensive style, Rigondeux managed to score two knockout wins in his last three matches, stopping Julio Ceja and Giovanni Delgado both in 2019.

But they were nowhere near the level of Casimero, who is expected to go out firing on all cylinders come fight night.

“Rigondeux, fight me,” Casimero told the same website. “Don’t run. I want a fight, you know. Because Rigondeux runs. People who are watching are sleeping.”

Hungry for the big-stage fame, Casimero is willing to put everything on the line, but he could not secure a fight against big-name foes like Japanese champ Naoya Inoue and Donaire.Donaire was supposed to have substituted for Rigondeux, but the projected all-Filipino extravaganza fell through over an antidoping dispute.