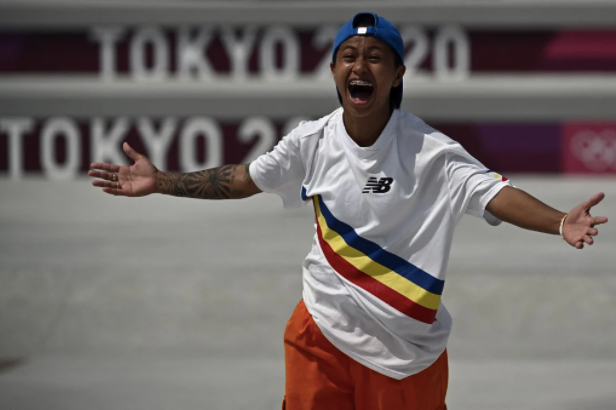 Philippines’ Margielyn Arda Didal reacts as she competes in the women’s street preliminary round during the Tokyo 2020 Olympic Games at Ariake Sports Park Skateboarding in Tokyo on July 26, 2021. (Photo by Jeff PACHOUD / AFP)

According to the 22-year-old Didal, the pride of Barangay Lahug, Cebu City, that she was very proud to represent the country, which might be the reason why she was smiling and kept a very cheerful manner in the entire competition.

“This is for the country. I’m really proud to represent the Philippines,” said Didal in a statement from the Philippine Sports Commission (PSC).

The 2018 Asian Games gold medalist enjoyed every moment in her Olympic debut, which is also the debut of her sport, skateboarding, along with three other disciplines in karate, sports climbing, and surfing.

Japan’s 13-year-old star Nishiya Momiji won the gold with a total score of 15.26 while Brazil’s Rayssa Leal earned the silver by scoring a 14.64-point performance. Nakayama Funa bagged the bronze with a 14.49 total.

SkatePilipinas President Carl Sambrano already hinted that Didal’s ascend in the sport will continue in 2024 for the Paris Olympics.

The PSC vowed to continue their support to Didal.

“We will continue to support Margielyn,” said PSC chief of staff Marc Velasco. /WITH PR