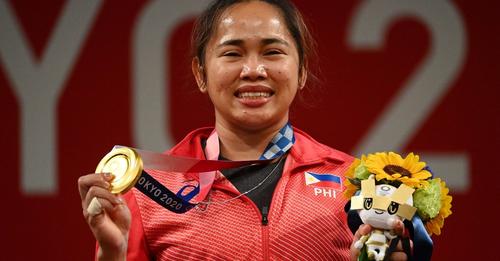 Gold medallist Philippines’ Hidilyn Diaz stands on the podium for the victory ceremony of the women’s 55kg weightlifting competition during the Tokyo 2020 Olympic Games at the Tokyo International Forum in Tokyo on July 26, 2021. (Photo by Vincenzo PINTO / AFP)

Diaz, who bagged the country’s historic gold medal in the women’s -55 kilogram category of the women’s weightlifting competition in the Tokyo Olympics on Monday, July 26, 2021, increased her windfall to P48.5 million as of this writing.

PSC’s cash incentive is part of the Republic Act 10699 or the expanded incentives act.

The law entails that all national athletes and other athletes who surpass Philippine record or ranking in any measurable international sports competition shall be given cash incentives, the amount of which may be determined by the PSC.

PSC officer-in-charge, Commissioner Celia Kiram confirmed that the additional incentive has already been approved, signed and ready for release.