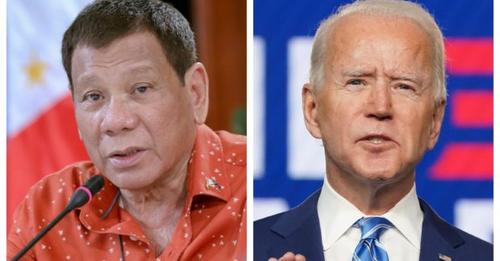 MANILA, Philippines — Eleven Democrat senators from the United States have urged the Biden administration to condemn “at the highest levels” the alleged “continuing pattern of human rights violations” under the Duterte administration.

“We write to express our continued concern about the human rights situation in the Philippines, and seek to better understand the Biden administration’s strategy for addressing the Duterte government’s continuing pattern of human rights violations,”  they said in the letter dated July 26.

“We urge the Biden administration to stand with the people of the Philippines as they continue to fight for their universal human rights. The State Department should condemn the aforementioned abuses at the highest levels in our diplomatic engagements with Philippine government representatives, as well as publicly,” they added.

INQUIRER.net has reached out to Malacañang for comment but has yet to receive a response as of posting time.

The senators, led by Senator Ed Markey, who chairs the US Senate Foreign Relations Subcommittee on East Asia and the Pacific, pointed out that maintaining a bilateral relationship with a long-standing ally like the Philippines “requires upholding shared values,” such as the protection of human rights, including freedom of speech, freedom of the press, and “vibrant” democratic governance.

“Yet, Philippine President Rodrigo Duterte has waged a multi-year extrajudicial, violent, and inhumane ‘war on drugs’ that has devastated communities, and has been used as justification to target the independent press, political opponents, human rights advocates, and compromise judicial due process,” they said.

This, as the senators cited allegations of “extrajudicial police misconduct” in relation to Duterte’s brutal drug war.

“Opposition figures, journalists, and activists critical of the killing campaign frequently find themselves targeted by the Duterte government,” they also said.

Further, they called out “fresh attacks” launched against civil society, human rights defenders, and the media even amid the COVID-19 pandemic.

The senators also pointed to alleged red-tagging of individuals and groups “falsely accused of terrorism and communism, in an effort to stifle criticism and freedom of expression.”

Aside from these, the senators also flagged attacks against critics, journalists, and free speech, which they said were launched to “quash opposition to or criticism of its heavy-handed policies.”

They also cited the 2021 World Press Freedom Index, where the Philippines ranked 138th out of 180 countries and territories.

“In July 2020, the Philippine Congress forced the closure of ABS-CBN, the nation’s largest independent news organization,” the senators added.

“This unfortunate pattern of silencing critics and shuttering space for democratic discourse is exemplified in two high profile cases we have repeatedly raised with the State Department,” they US senators pointed out.

The senators reminded Blinken of the concern he raised on the “decline of democracy worldwide” during his confirmation hearing in the US Senate and even committed to convening a global summit of democracy.

“The status of democracy and human rights in the Philippines should be central to that discussion and any bilateral or multilateral engagements with the Philippine government,” the senators’ letter read.

To recall, Duterte barred Markey, Leahy and Durbin from entering the Philippines after they backed a provision in the US 2020 budget that would ban the entry to the United States of Filipino officials involved in the detention of Senator Leila de Lima.