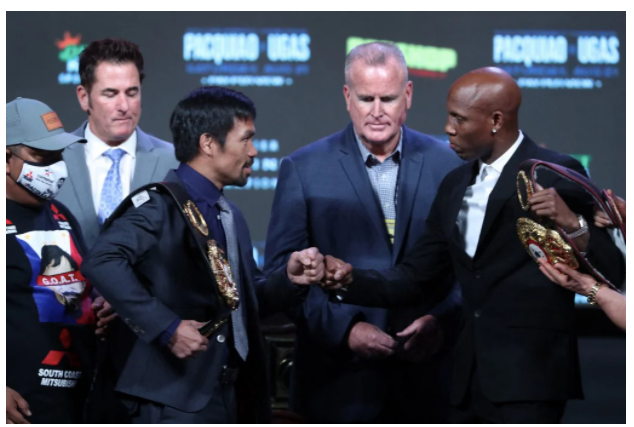 MANILA, Philippines—Yordenis Ugas is confident that he won’t go down against Manny Pacquiao in their WBA welterweight title fight on Saturday (Sunday Manila time) at T-Mobile Arena in Las Vegas.

Despite coming into the fight in less than two weeks’ notice, Ugas said he has come prepared against Pacquiao, who was supposed to fight WBC and IBF champion Errol Spence in the main event of the card.

“I’m 100 percent certain he can’t knock me out,” said Ugas, who was initially put in the undercard to fight Fabian Maidana.

“I’ve done all the work and preparation. Over these past six years, I’ve really been hitting my stride and I don’t think Manny can knock me out.”

Pacquiao, while he won’t be able to potentially add the WBC, IBF, and Ring Magazine titles to his collection, will look to reclaim his status as the undisputed WBA champion against Ugas.

The sanctioning body relegated Pacquiao to “champion in recess” following his inactivity to defend the belt while Ugas was elevated from “regular” to Super champion in January 2021.

“I’m not disappointed at all because my hard work in training is not wasted,” said Pacquiao, whose last KO win was in July 2018 when he stopped Lucas Matthysse in seven rounds to become the WBA “regular” champion.

Pacquiao became the Super champion in July 2019 when he defeated Keith Thurman via split decision.

Yordenis Ugas: Fighting for legacy in biggest match of his life

One final round for Manny Pacquiao?