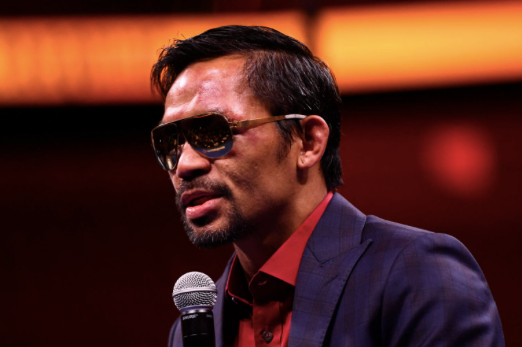 Manny Pacquiao of the Philippines speaks during a press conference after his defeat to Yordenis Ugas of Cuba in the WBA Welterweight Championship boxing match at T-Mobile Arena in Las Vegas on August 21, 2021. (Photo by Patrick T. FALLON / AFP)

MANILA, Philippines — Senator Manny Pacquiao on Saturday said he has yet to decide on his plans for the 2022 elections.

(Once I run [for office], many people will get hit.)

(I will choose what is right if I will have to make that decision.)

Pacquiao’s name was floated as one of those gunning for the presidency in the 2022 polls.

Senator Aquilino “Koko” Pimentel earlier said Pacquiao will be nominated “for sure” as the standard-bearer of the PDP-Laban wing headed by the professional boxer-turned politician, in their own national assembly this September.

The senator said he will reach a decision before October 1, the start of the period for the filing of certificates of candidacy.

Pacquiao added that he has three choices: To run for president, to run for Senate reelection, or quit politics.