‘Yes, I swindled, Your Honor’ 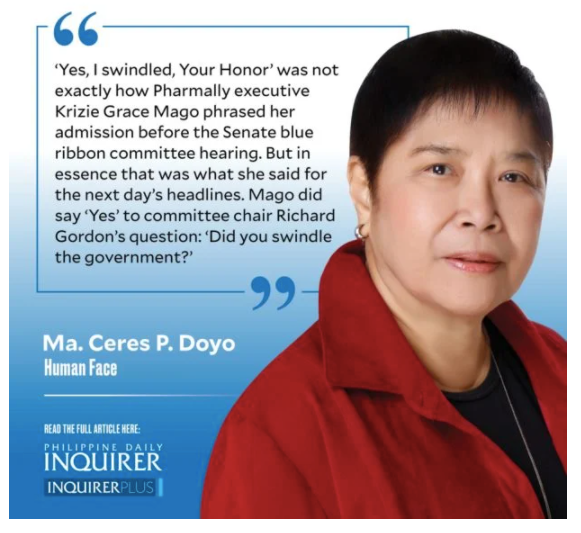 “Yes, I swindled, Your Honor” was not exactly how Pharmally executive Krizie Grace Mago phrased her admission before the Senate blue ribbon committee hearing. But in essence that was what she said for the next day’s headlines. Mago did say “Yes” to committee chair Richard Gordon’s question: “Did you swindle the government?”

The Senate was investigating the undercapitalized trading company that bagged a P11.7-billion contract with the Procurement Service of the Department of Budget and Management to supply the Department of Health (DOH) with face masks and shields, personal protective equipment, and COVID-19 testing kits.

One could not tell if Mago’s yes was a defiant yes (as in “So sue me!”) or an acquiescent yes. Either way, it seemed like there was nowhere else for her to go. To use clichés, she was between a rock and a hard place, between the devil and the deep blue sea. But on second thought that needn’t have been the case as far as she was concerned. She might have seen herself as between damnation and redemption and there was a way out. Abort flight or perish.

If Senate hearings were court hearings, Mago’s yes would seem like a plea bargain, that is, pleading to a crime lesser than the bigger one that she could be charged with, like as accessory to plunder or some such thing. Or did she suddenly think of making herself some kind of whistleblower-come-lately or future state witness?

We do not know, after all the grilling she underwent, what made Mago cave and fess up to having changed the date of manufacture of the merchandise and say “Yes” to having swindled the government. Gordon’s question was blunt and direct, like what I see on the TV crime series “Law and Order” where breathing-hard investigators sometimes pop the question first thing: “Did you rape so and so?”, hitting the stunned suspect right on the groin.

Mago’s reply was a bombshell of a yes, no doubt. Was it a spur-of-the-moment decision or a deliberate one she had thought of before she went to the Senate hearing? A last resort? An escape route? Mago was, after all, not the big fish but lower in the Pharmally corporate hierarchy.

Now Senate investigators do not know her whereabouts. Or do they? Inquirer’s headline last Sunday: “Mago ‘incommunicado’ since damning testimony.” The blurb below: “Sen. Richard Gordon says that after her bombshell testimony, the Pharmally executive could no longer be reached, prompting Senate President Vicente Sotto III to order a search for her. She testified that medical-grade face masks that were damaged and soiled, with production dates altered to show they were made this year, were sold by her company to the Department of Health.”

Now those in the health sector ask: Could the low-grade health equipment procured by the DOH have endangered the lives of health care frontliners or rendered them vulnerable? Not a few had succumbed to COVID-19.

It goes without saying that advancing the production date of goods means advancing their expiry date. Now President Duterte, overly reacting to the Senate investigations that could lead to guilty parties in his government, is asking if health equipment do expire. A kind of palusot, if you ask me. If they don’t, why the need to alter the production dates? But hey, it is not only the dates that are in question, and going into that should not be considered nitpicking. Small misdeeds often lead to bigger crimes. The tip of the iceberg, so to speak. A strand of hair, a piece of DNA on a victim’s clothing. We cannot lose sight of the bigger issue of an undercapitalized company bagging a multibillion contract with the government and the persons—yes, the persons—involved in the deal, the procurement, and the payments. For those watching on the sidelines, particularly the so-called creatives, there is fun in connecting the dots and turning them into memes, the guilty be damned.

And so, Ms. Mago, wherever you are, let us know if you are safe or unsafe, in hiding or in flight, or if there is more we need to know. You did the right thing in saying yes, yes on behalf of the real bigger swindlers.

Read Next
Primary Homes Inc. Tops Off Tower B In Mactan Project