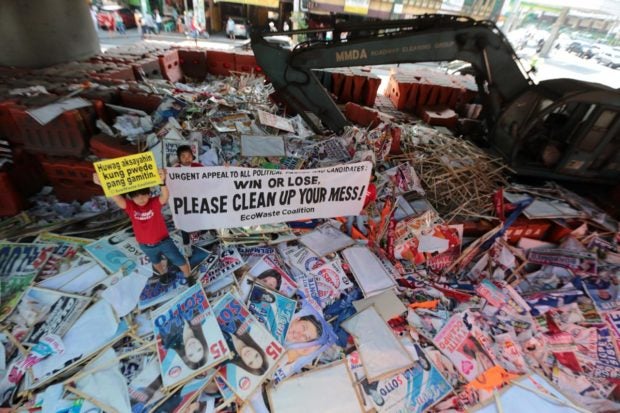 After the May 2019 elections, when this photo was taken, environment group EcoWaste Coalition urged candidates and parties to conduct a post-election cleanup and upcycling activities at an event at the MMDA temporary holding area for dismantled campaign materials along EDSA. (File photo by GRIC C. MONTEGRANDE / Philippine Daily Inquirer)

CAGAYAN DE ORO CITY, Misamis Oriental, Philippines — Several environmental groups have sent a letter appealing to the Chairman Sheriff Abas of the Commission on Elections (Comelec) to initiate pro-environment measures ahead of the 2022 elections.

“Considering the problems already plaguing our society due to garbage, plastic pollution, climate change and COVID-19, we urge the Comelec to champion much needed policies and practices that will protect our fragile environment from being further degraded by the avalanche of partisan political activities leading to the 2022 elections,” said Eileen Sison, EcoWaste Coalition president.

“We hope Comelec will commit to greening the 2022 polls to the best of its ability and with the participation and support of all stakeholders,” Sison said, noting the widespread disregard of environment rules and regulations in past elections.

These violations include the unrestrained plastering of campaign posters outside Comelec-designated areas, most notoriously on trees, electric posts and walls.

The groups also scored the unbridled display of “indirect” political propaganda such as graduation and fiesta banners and tarpaulins; the unregulated noise from mobile political propaganda and during campaign meetings; the unchecked distribution and littering of sample ballots on Election Day; the open burning of campaign waste materials, which is prohibited under the Clean Air Act and the Ecological Solid Waste Management Act, and the failure to avoid the use of single-use plastics, adding to the mounting plastic pollution that ends up in the waterways and the ocean.

“We have also observed the rampant use of campaign materials that are hardly reused or recycled, particularly plastic tarpaulins, posters and buntings, as well as the confetti thrown in ‘miting de avance,’” the groups noted.

Come Election Day, there will be an expected deluge of disposable food and beverage containers inside the polling centers for the members of the Board of Election Inspectors, poll watchers, and volunteers.

The lack of an ecological system for managing discards such as food leftovers and their single-use containers will be an environmental nightmare, the groups said.

To address these scenarios, the groups urged the Comelec to, among others, require all individuals and groups running for election to abide by the Ecological Solid Waste Management Act, which prohibits littering, open dumping, and open burning of waste.

They also proposed making it mandatory for parties and candidates to make use of recyclable and reusable materials free of hazardous chemical substances for their electoral campaign, and for them to conduct a compulsory post-election cleanup.