‘Dilawan’ no more? Robredo turns to pink — the color of protest, activism 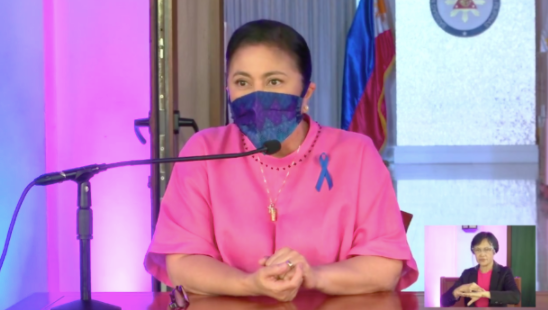 MANILA, Philippines — When Vice President Leni Robredo stepped out on Thursday to announce her decision to run for president, she was wearing a distinctive pink ribbon.

It could have just meant support for the breast cancer month of October, except that the next day, when she announced that she was teaming up with Senator Francis Pangilinan, she was donning a pink outfit.

This left many wondering whether she was dissociating herself from the color yellow, the hue widely associated with the Liberal Party, which the current administration had derogatorily given the byname “dilawans.”

But according to Robredo, this was not a planned event, as she only adhered to the color picked by volunteers who were urging her to run.  She also revealed that they did not have the chance to pick a color motif because her decision to run for president was admittedly belated.

She also noted that the color used by a candidate is not what defines him or her, as should be based on the choices people make.

Regarding yellow, she said that this colorof LP was used for past struggles.  However, she also said that there are bigger fights now, which are symbolized by the color pink.

She also stressed that the fight is not only about preventing the return of the dictator’s son — former senator Bongbong Marcos — but also against the problematic current government.

After Robredo announced running for president in the 2022 national elections, social media saw a wave in posts using pink undertones or highlights, in support of her decision.