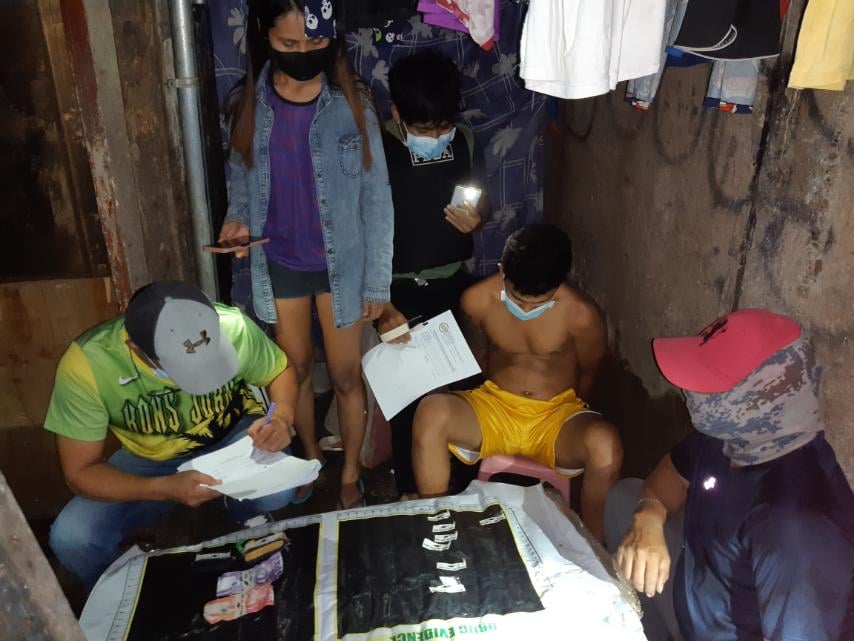 A 26-year-old man (wearing yellow shorts) was arrested after a buy-bust operation was conducted against him in Barangay San Nicolas in Cebu City around 1:30 a.m. on Tuesday, October 19, 2021. | Photo courtesy of PDEA-7

But should there be legitimate complaints regarding illegal deeds committed by their agents, the PDEA-7 office is open to cater to them.

Leia Alcantara, PDEA-7 spokesperson, said that internal cleansing is one of the priorities of their agency, stressing that the agency will not be close-eyed should there be proven cases that their agents are involved in illegal activities.

(We’ve received various criticisms in our anti-illegal drug campaign even in our destruction of dangerous drugs, we receive negative comments. But we understand that it’s part of the job and that [we] are prone to these comments because the illegal drug problem is not simple.)

“We understand that it’s also very easy for people to assume when they’re viewing the operation from a device and wala sila ka-witness (they did not witness) how our agents developed the operations. That’s why we also try to educate the public about our campaign and operations, about provisions in RA 9165, nganong dapat naay inventory and such (why there is a need for an inventory and such),” she added.

Alcantara said this following the arrest of 26-year-old Neil Vincent Enriquez in a buy-bust operation conducted in barangay Basak San Nicolas in Cebu City around 1:30 a.m. on Tuesday, October 19, 2021.

Enriquez belied that he owns the 5 grams of suspected shabu seized from his possession, which has an estimated market value of P34,000.

(Planted evidence is a usual defense for those arrested. They say they do not own the items. It’s nothing new.)

Enriquez’s arrest stemmed from a report from a concerned citizen that was sent through “Isumbong Mo Kay Wilkins.” This platform was launched last 2020, which allows the public to report any illegal drug activities they notice in their area.

After verifying the veracity of the report, the agents will then conduct an operation against the suspect(s).

Alcantara said that it took 3 weeks of case build-up for the operatives to conduct an operation against Enriquez. Allegedly, he could dispose of around 20 to 30 grams of ‘shabu’ per week in the barangays here in Cebu City.

Enriquez is currently detained at the holding facility of PDEA-7 located in Sudlon in barangay Lahug Cebu City for alleged possession and selling of ‘shabu’.

READ: PDEA-7 chief: Drug sting in Central Luzon expected to cause dent in supply in CV