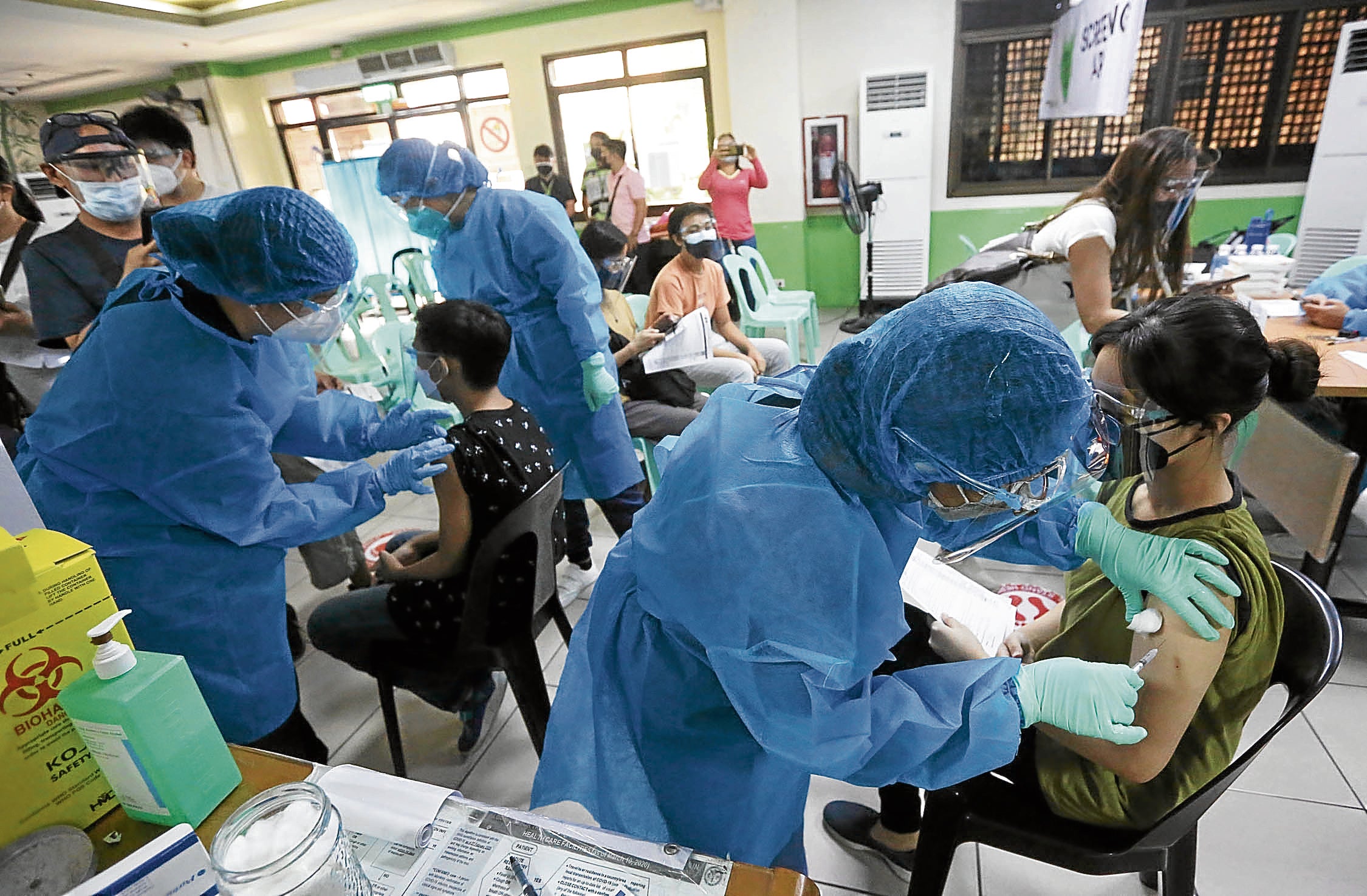 PROTECTING THE YOUNG Teenagers accompanied by their parents receive their first COVID-19 shot at Las Piñas General Hospital on Friday, as the vaccination rollout for the 12 to 17 age group continues, with priority given to minors with comorbidities. —MARIANNE BERMUDEZ

MANILA, Philippines — Being vaccinated is not a requirement for students attending limited in-person classes in colleges and universities, according to Commission on Higher Education (CHEd) chair Prospero de Vera III.

De Vera made the clarification in a Senate hearing on the CHEd’s proposed 2022 budget, after he was quoted in news reports as saying the agency wanted to make COVID-19 vaccines mandatory for students attending in-person classes.

He denied making that statement. There is no national government policy making COVID-19 jabs mandatory for work and school.

However, the CHEd chair stressed the decision to require vaccination of their students would depend on the schools themselves. “While we do not require mandatory vaccinations, universities can do it because it’s their facilities that are being managed. That is my position,” De Vera said.

De Vera said private schools themselves had proposed making vaccination a must especially for student-athletes.

Member schools of the University Athletic Association of the Philippines and the National Collegiate Athletic Association started vaccinating their student-athletes on Thursday. But they were still awaiting the approval of ChEd and other national government agencies to resume their training and competitions.

While CHEd is against making jabs mandatory, De Vera said, students and teachers are encouraged to be inoculated.

He noted that in medical courses that have been allowed to resume in-person classes, CHEd had monitored a 1-percent COVID-19 infection rate among the students and faculty since January.

According to De Vera, 71 percent of faculty and education personnel under CHEd were already vaccinated.

At a separate briefing, De Vera said the commission was still waiting for a higher vaccination rate not just among college students and school staff but also in local governments where the schools are located before it could allow in-person classes in low-risk areas.

“You cannot just look at the situation in the school because students will travel from their homes to the school. They will ride public transportation,” he said.

At present, in-person classes are only permitted for certain courses, such as medicine and allied health sciences, engineering and technology programs, hospitality and hotel and restaurant management, tourism and travel management, marine engineering, and marine transportation.

Meanwhile, more minors with comorbidities have received their first COVID-19 shots as the second phase of the government’s pediatric inoculation expanded its coverage in Metro Manila.

From the initial eight pilot hospitals, 17 more hospitals across the capital regions have been included in the program.

Some 4,640 minors aged 12 to 17 have been vaccinated during the first phase, where they were given Moderna or Pfizer shots, the only two vaccines approved for this demographic, according to the Department of Health.

Phase three of the pediatric vaccination program is set for Nov. 5, this time in regions where at least 50 percent of senior citizens have been vaccinated.

In Quezon City, the local government has opened its online booking for vaccination of minors between age 12 to 17 who have comorbidities, as part of its efforts to achieve herd immunity in the city.

Starting on Friday, parents or guardians who wish to have their child inoculated may register and book their slots through the QC VaxEasy website: qceservices.quezoncity.gov.ph/qcvaxeasy, or through their respective barangays. —With a report from Krixia Subingsubing and Kathleen de Villa