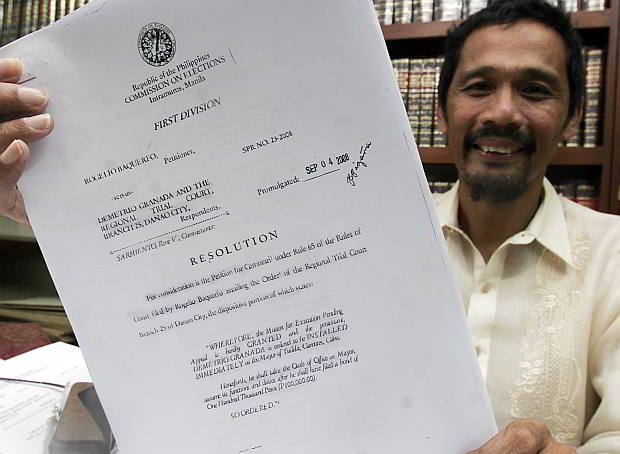 Lawyer Noel Archival was a ‘media darling’ for being always open to questions on cases involving his clients. (CDN FILE PHOTO)

Three of the five police officers implicated in the Feb. 18 killing of Cebuano lawyer Noel Archival will go to trial for multiple murder and frustrated murder.

The three officers were transferred to Camp Crame soon after the getaway car in the murder, a red Toyota Vios sedan, was found in the HPG-7 headquarters a month after the lawyers death.

The officers are supposed to be in detention at the PNP Custodial Center in Camp Crame.

Murder is a non-bailable offense if evidence against the accused is strong.

The prosecutor gave weight to the testimony of Paolo Cortes, the lawyer’s companion in the car, who survived the ambush.

Archival was on the road with his bodyguards Candido Miñoza, Alejandro Jaime, and Paolo Cortes when the vehicle were raked with gunfire along the national road in Dalaguete town in southern Cebu.

All, except Cortes, were killed instantly.

The National Bureau of Investigation (NBI) identified a red sedan and gray pickup used in the attack.

The indictment cited the NBI’s findings, including entries in the logbook of the impounding area of the regional office of the PNP Highway Patrol Group, where the implicated policemen were assigned.

The prosecutor said “there was a conspiracy among the respondents to do harm to Atty. Archival and the other victims who are just incidental casualties of war.”

Evidence showed that the police officers had an axe to grind against Archival who had squared off with the HPG officials several times.

“This probably is enough motive for some HPG 7 officials to get back at Atty. Archival especially that they have access to logistics to carry out retaliatory measures including impounded vehicles and firearms,” said the prosecutor.

The firearms used included a 5.56 Armalite rifle which is a standard government issue for the military and police.

Tagaan took over the case after the entire Cebu Provincial Prosecutors’ Office inhibited from handing it.

Tagaan’s ruling no longer needs the approval of higher officials in the prosecution office since, in this case, he was designated as the Acting Cebu Provincial Prosecutor by the regional state prosecutor.

The HPG officials have 15 days to file a motion for reconsideration.

Their defense lawyer Inocencio De La Cerna Jr. said he would issue a comment later today. His clients earlier denied the charge and insisted they were in Cebu City when the ambush occurred.

Archival’s younger brother Nelson was elated with the developments.

“We’ve been waiting for this resolution since the case was filed last April. Our family is glad. We’re hoping that the wheels of justice will keep rolling,” he told CDN yesterday.

Nelson, a councilor of barangay Talamban in Cebu City, however, said they would have wanted the prosecutor to implead the two other police officers, Galan and Mara.

He said thheir lawyers Gloria Lastimosa-Dalawampu, Democrito Barcenas, and Gerardo Carillo are set to file a motion for reconsideration to request the prosecutor not to drop the charges against Galan and Mara.

NBI 7 Head Agent Rennan Augustus Oliva said they are just waiting for the court to issue arrest warrants against the respondents who have been “restricted to camp” at the PNP headquarters in Manila since April.

“The resolution of the prosecutor is just the first step in the quest for justice. We’re not contended with that. What we’re after here is conviction,” said Oliva, one of the two team leaders in the Archival slay case.

The survivor’s testimony of Cortes was crucial.

He described the vehicles of the assailants – a red Toyota Vios and a gray Mitsubishi Strada.

Then the gray SUV came from behind , drove alongside them, and assailants fired several shots at Archival’s vehicle.

Empty shells were fired from two 5.56 caliber and two 9 mm firearms, indicating that four or more persons participated in the ambush.

CCTV footage from a camera in the Dalaguete town hall recorded the passing image of the red sedan. The car was later found in the impounding area of the HPG in Sudlon, barangay Lahug, Cebu City.

Logbook entries showed that the red Toyota Vios was driven out by Lerion at 9:42 a.m. on Feb. 18, 2014—four hours before Archival and his companions were ambushed. Lerion returned the car at 3:38 p.m.

The pickup was later taken by Bacani to the Off Road Motorshop in barangay Maguikay, Mandaue City for repairs then suddenly pulled out before work was done on March 20, the same day a search warrant was issued by the court for the inspection of the HPG impounding area.

NBI agents found only the Toyota Vios in the impounding area. The gray Strada was no longer there.

A guard executed an affidavit that the pick up was brought out of the compound and that a Tagalog-speaking man told him to no longer record its exit on the logbook.

A forensic examination conducted by the NBI on the red Toyota Vios revealed the presence of gunpowder nitrates residues on the front right window as well as the rear back window and the carpet.

A bullet shell casing found beneath the back seat also matched the empty shells found in the crime scene.

The respondents are facing an investigation before the Office of the Ombudsman in the Visayas for allegeldy using impounded vehicles.

The prosecutor said the standing dispute between Archival and th e respondents may be the motive behind the killing.

Archival had filed a string of complaints against the policemen whom he accused of extorting money from his clients, Jane Catherine Go and Chris Reinz who were charged by the HPG for violating the anti-fencing law, “carnapping”, and illegal transfer of vehicle license plate numbers.

Read Next
Construction halted on car showroom after worker’s death