Barili arrest: Man, accused of 2019 killing of a woman in Cebu City, nabbed 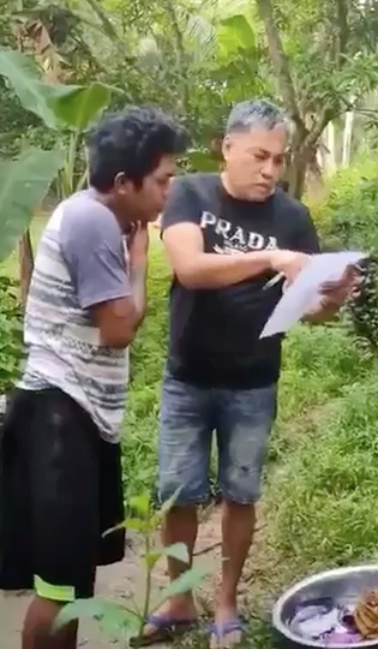 A police officer shows Niñomar Tugot the warrant of arrest for murder against Tugot. The accused was arrested this morning, November 11, in his home in Barili Town. | screen grab from AKG-VFU video of the arrest

CEBU CITY, Philippines — A 29-year-old man, who is accused of killing a 27-year-old woman in 2019 in Barangay Ermita, Cebu City, was  detained at the Police Regional Office in Central Visayas detention cell after he was arrested in a Barili town western Cebu this morning, November 11.

Niñomar Tugot of Barangay Mantalongon, Barili town was arrested in his home in Barili. Policemen from the Anti-Kidnapping Group Visayas Field Unit (AKG-VFU) and the Barili Police Station served the warrant of arrest for murder against Tugot, who did not resist arrest.

The warrant of arrest for murder was issued on November 10, 2021 by Judge Merlo Pasco Bagano of the Regional Trial Court Branch 14 in Cebu City. No bail was recommended.

According to the police report, Labrador was allegedly the girlfriend of Tugot’s former live-in partner. This relationship allegedly prompted Tugot to attack Labrador.

Police said Tugot allegedly stab Labrador three times in the body which resulted to her death.

Because of this, police said that the motive of the killing was a personal grudge.

Wife, who is wanted for killing her hubby in Tabogon, nabbed in Cebu City

NBI-7’s message to woman wanted for Parricide: ‘You can run but you can’t hide’

Wife, 9 others facing murder case for brutal death of cook