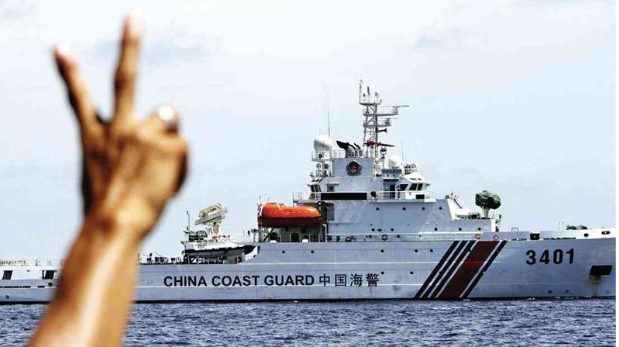 A Philippine Marine soldier flashes the peace sign to a Chinese Coast Guard ship after it tried to block a resupply vessel from restocking the BRP Sierra Madre on Ayungin Shoal in 2014. INQUIRER FILE PHOTO

MANILA, Philippines — The Philippines will continue to insist on its “sovereignty, sovereign rights, and jurisdiction over our territory” despite reports that the China Coast Guard recently “blocked and water cannoned” Philippine supply boats in the West Philippine Sea, a Palace official said.

“The Department of Foreign Affairs (DFA) has acted swiftly and has condemned the incident involving the Chinese Coast Guard,” acting presidential spokesperson and Cabinet Secretary Karlo Nograles said in a statement on Thursday.

“As we have in the past, we will continue to assert our sovereignty, sovereign rights, and jurisdiction over our territory,” he added.

According to the Western Command in Palawan, the incident occurred on November 16 and no one was injured from the incident although the resupply boats had to abort their mission.

Locsin said he has talked to Chinese ambassador Huang Xilian and the Ministry of Foreign Affairs in Beijing to protest and denounce the incident.

Filipino troops are stationed in BRP Sierra Madre, a transport ship internationally grounded in 1999, to serve as the Philippine Navy’s outpost.

“Ayungin Shoal is part of the Kalayaan Island Group (KIG), which is an integral part of the Philippines, as well as the Philippines’ exclusive economic zone and continental shelf, and over which the Philippines has sovereignty, sovereign rights, and jurisdiction,” Locsin noted, adding that the Chinese Coast Guard vessels’ acts are illegal.

Go to war with China over West PH Sea? It will be a ‘massacre’, says Duterte

Read Next
Minors, 15 years old and below, barred from supermarkets, groceries