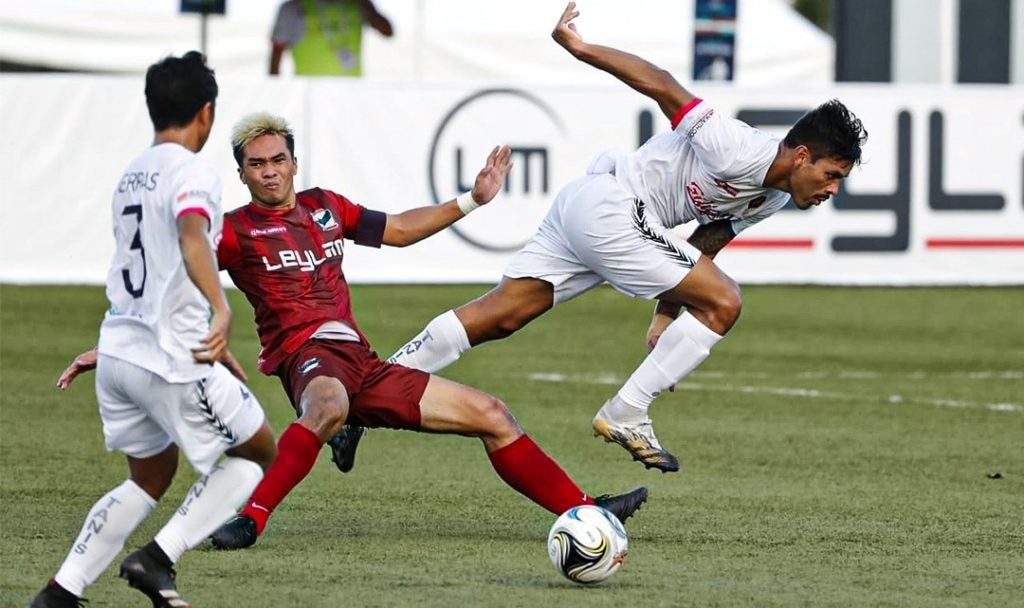 Kintaro Miyagi (red jersey) tries to secure a ball possession in between two Laguna defenders during their match in the PFL Copa Paulino Alcantara. | PFL Photo

Despite not logging a single win in the mini tournament held at the Philippine Football Federation (PFF) national training center, CFC somehow gave all their opponents hard-earned victories.

On Friday evening, they forced the heavily-favored Laguna in their rematch with a nerve-wracking penalty shootout as they finished the regulation scoreless.

During the penalty shootout, the Stallions utilized their experience and talent in defeating CFC and clinch the third overall place in the tournament.

In the second set of the penalty shootout, Argentinean Ricki Sendra put CFC on the lead,2-1, temporarily after nailing his attempt, but was quickly tied,2-2, when Abe Placito answered him with his own shot.

CFC’s Charles Dabao brought CFC back the lead,3-2. However, Korean Kim Sung-Min immediately tied the scores,3-3, wiwth one of his own goal.

Laguna got a breather in the fourth attempt when Papu Corsame’s shot to the left was perfectly guessed by Laguna’s goal keeper Kenneth James.

James successfully denied Corsame’s attempt while Warren Bedia gave Laguna the lead,4-3, from his attempt to the right side that was almost blocked by CFC’s goalkeeper Ace Villanueva.

Joaco Cañas kept Cebu’s hopes alive by scoring his attempt and tied the scores at,4-4.

However, Laguna’s Finn McDaniel put the lights out for CFC with his game-winning goal in the last attempt giving his club,5-4, victory.

CFC’s head coach Oliver “Bingbing” Colina in his Facebook post said that they may not have won the tournament, but it was already enough to introduce the club the Philippine football scene.

“We may not have won, but we showed Philippine football who the Cebu FC are. We will be back stronger,” said Colina.