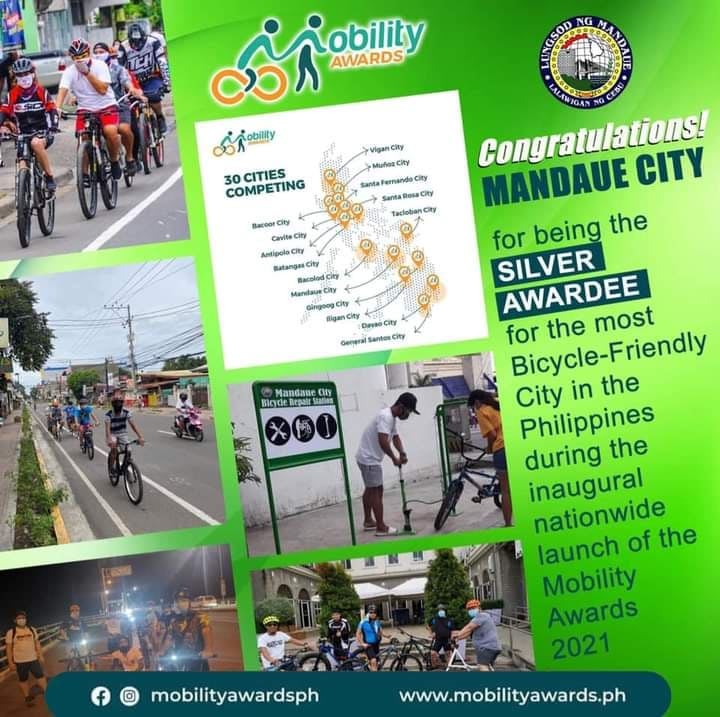 Mandaue City was recently named the second most Bicycle-Friendly City in the whole country during the inaugural Mobility Awards.

MANDAUE CITY, Philippines — Mandaue City is the second most bicycle-friendly city in the Philippines, organizers of the annual Mobility Awards 2021, announced.

Mandaue was the silver awardee among 30 cities in the country that were nominated.

Iloilo won the gold while Naga City in Bicol shared the silver award with Mandaue.

Lawyer John Eddu Ibañez, executive secretary of Mayor Jonas Cortes, said that they did not actually send an entry and was surprised that somebody has sent a nomination for Mandaue to be included.

Ibañez said the city created programs such as the route plan for the implementation of bicycle lanes, installing bike repair stations at the different areas in the city to ensure the safety of bikers traveling in Mandaue.

Aside from the privately-owned bike-repair stations, the city has four bike repair stations located in Barangay Centro at the back of city hall, Barangay Jagobiao, outside Parkmall, and J Centre Mall.

The bike repair stations have air pumps for flat tires, bike racks, tools, among others.

The city government has also installed bicycle lanes all over the city.

He said that the non-government organization also conducted their inspection to check if the city is indeed a bicycle-friendly city.

Mandaue will receive a Silver Bicycle Friendly Recognition sign, a certificate indicating the city’s ranking, and gift certificates from bike-friendly establishments worth P8,000.

The Mobility Awards is organized by the Institute for Climate and Sustainable Cities (ICSC), MNL Moves, The Climate Reality Project Philippines, 350.org Pilipinas, and Pinay Bike Commuter Community to inspire action, involvement, and coordination among local government units, workplaces, and establishments who want to improve conditions for urban mobility.      /rcg