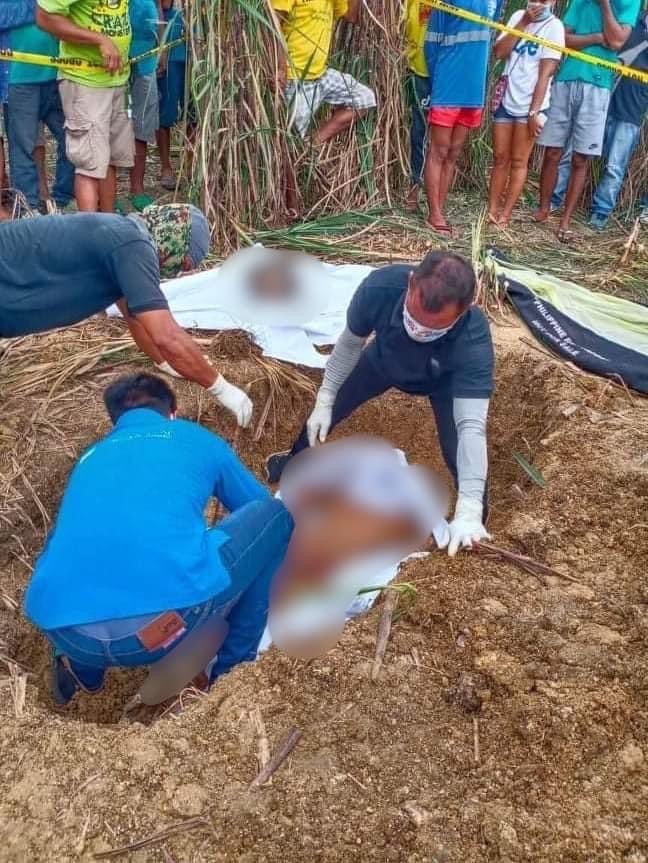 A man believed to have been beheaded was found buried in a 4-foot deep grave in the middle of a sugarcane plantation at past 7 a.m. today in Purok Dragon, Barangay Managase in Tabogon town in northern Cebu. | Contributed photo via Paul Lauro

CEBU CITY, Philippines — Foul smell in a sugarcane plantation in a town in northern Cebu on Thursday, December 2, led two kids to a 4-foot-deep grave where an unidentified body, whose head was cut off, was buried.

Police Corporal Dan Bernard Navarro, desk officer of the Tabogon Police Station, told CDN Digital in a phone interview that police investigators estimated the body to have died two to three days ago.

Bernardo said that the man, who was only in his underwear, was found in a prone position and was estimated to be 5’2” to 5’5” in height.

He also said that a few fours after the body was found at past 7 a.m. on Thursday, a person went to the police station to inquire if the body was that of a relative of their family, who had gone missing.

As of this posting, the person was still at the Daanbantayan Funeral Homes where the unidentified body was brought.

Navarro said there were no updates yet if the person had identified the body as that of their missing relative or not.

Initial investigation showed that early this morning or at around late 6 a.m. to early 7 a.m., two kids went to the sugarcane plantation in Purok Dragon, Barangay Managase in Tabogon town to answer the call of nature.

While in the middle of the sugarcane plantation, the kids noticed a foul smell in the area and later went to check on where the smell originated.

They were led to a small patch of land in the middle of the sugarcane plantation which looked like it had been freshly dug and covered.

So out of curiousity, the kids tried to dig the loosened soil and found a red cloth. The kids then sought the help of a few passersby near the area. The kids also told them about finding something like a body of a man in the middle of the plantation.

The passersby and the kids dug deeper and later found the body of a man. Police were then informed about the body found in the area.

Scene of the Crime Operatives, who processed the area and retrieved the body from the 4-foot grave, noticed that the man’s head was severed or cut off.

Navarro said that there was a possibility that the man was beheaded and that could have been the cause of his death.

He also said that they could not tell yet if this was a salvage victim and they also had no reports of a missing person in the area.

He said that they had been coordinating with other police stations to find out if there were missing persons in their areas of jurisdiction.

As for the person, who visited the police station to inquire about the body found in the sugar plantation, Navarro said that he had no further details on who that person was or from where he was from.

For now, he said that their main goal was to find out the identity of the body so that they could start their investigation on his death.

Tabogon town is a third class municipality estimated to be at least 86 kilometers north of Cebu City.