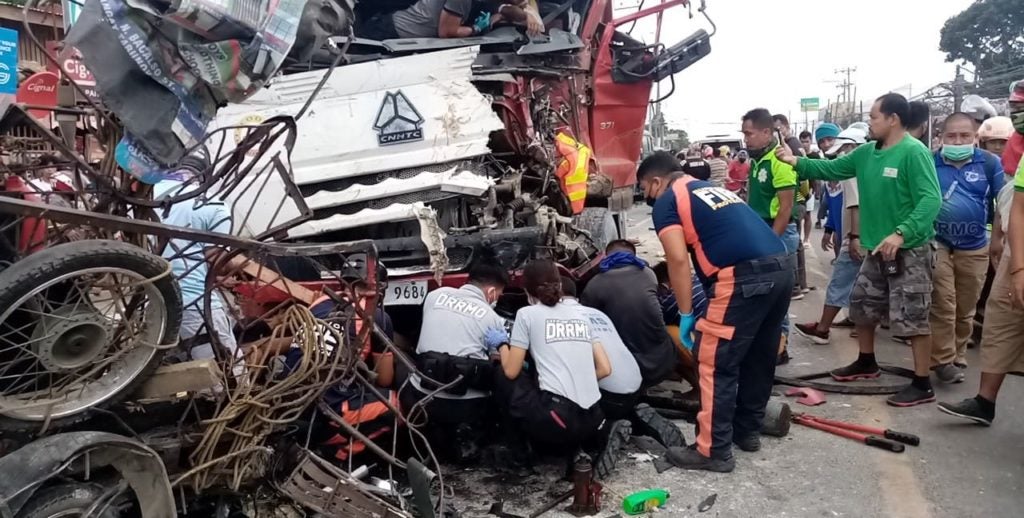 Cebu City, Philippines–Four died while 15 were injured in a a vehicular accident involving multiple vehicles in Barangay Lawaan 3 in Talisay City, Cebu on Friday morning, December 3, 2021.

Traffic investigators of Talisay City said the accident that happened past 10 am involved two dump trucks, six four-wheeled vehicles, four motorcycles, one bicycle, and one tricycle.

Three men, mostly drivers, and a women died on the spot. One of the drivers is critically injured and has been brought to a hospital.

The rest of the injured passengers, civilians, and drivers, have also been brought to the hospital.

Witnesses claimed that a civilian was also hit by the crash while walking on the sidewalk.

According to traffic investigator Police Master Sargeant Reynaldo Tican, the accident happened after the two dump trucks were allegedly trying to outrun each other at the Natalio Bacalso Highway past the Mananga Bridge while moving southbound.

One of the trucks hit an L300 van of a delivery courier, a multicab, a motorcycle, and bicycle, and then a modern jeepney (Beep).

(They were allegedly racing and that led to the collisions.)

The ensuing crash hit other vehicles.

Tican said they are now looking into CCTV footage as they start investigating the tragic accident.

*This is a developing story. Please refresh for updates.

Read Next
Legacies of shame