Cebu City postpones activities as it braces for Odette 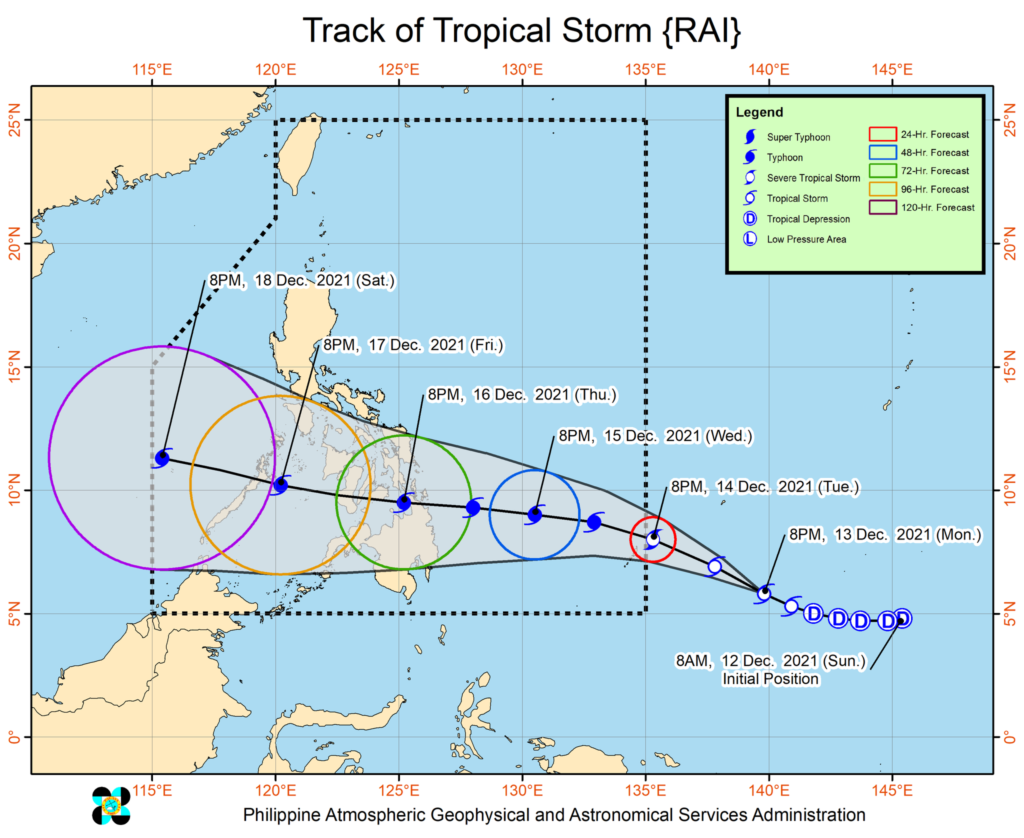 Projected track of Tropical Storm Rai (to be assigned the name Odette as it enters PAR) as of December 13, 2021. | Photo from PAGASA

CEBU CITY, Philippines – The Cebu City Government decided to postpone several events and activities that are scheduled this week as they brace for the arrival of Tropical Storm Rai.

Rai will be named Odette as soon as it enters the Philippine Area of Responsibility (PAR), which weather specialists projected will likely occur between Tuesday evening (Dec. 14) and early on Wednesday morning (Dec. 15).

Mayor Michael Rama on Monday, Dec. 13, announced that they will have to postpone the distribution of financial assistance to senior citizens to a later date.

“We may have to postpone the distribution of financial assistance to Senior Citizens from Dec. 18 to 20, towards Monday, Dec. 20 until the 22nd,” said Rama.

Rama also said that while they will push with the second round of National Vaccination Days, chances are that this will be interrupted.

“Should Odette cross over us, vaccination will be postponed from Dec. 17 through the weekend, until further notice,” he added.

On the other hand, the city government will start deploying their disaster and rescue response personnel within this week.

The City Disaster Risk Reduction and Management Office (CDRRMO) will also be conducting a pre-disaster meeting this Tuesday.

In addition, they will be providing tools and equipment to barangays in order to activate the city’s “Unified Communication System.”

According to the city government, at least 150 areas in 49 barangays will be closely monitored for possible flash flood and landslide.

Rama also told constituents, in particular, those residing on the banks of Kinalumsan River and Mahiga Creek as well as those in coastal villages like Ermita, Pasil, and Subato to start their preparation.

“Please understand that our CDRRMO will have to facilitate preventive evacuation. The same is true at portions in our mountain barangays, like Buhisan,” Rama added.

Based on the 4 a.m. weather bulletin from the Philippine Atmospheric Geophysical and Astronomical Services Administration (Pagasa), Rai is located 1,380 kilometers east of Mindanao. It is also projected to pass through and hit Central Visayas by Thursday, December 16.

The storm’s presence, however, was already felt in Eastern Visayas, Caraga, and Davao regions as its troughs bring cloudy skies with scattered rain showers and thunderstorms in these areas.