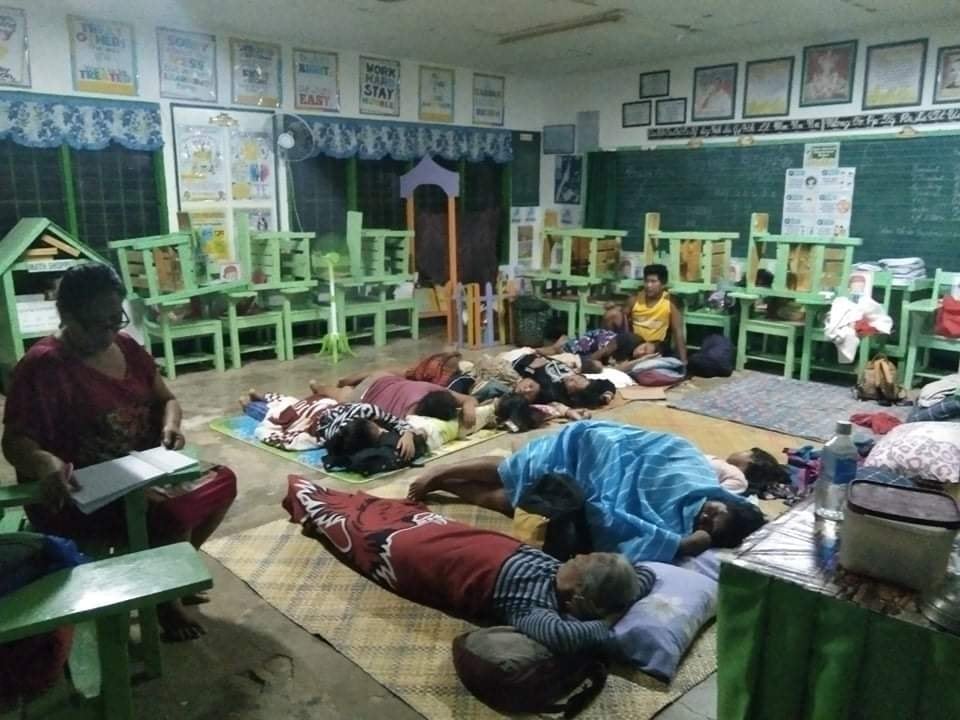 At least 66 families have been transferred to Brgy. Hilantagaan Evacuation Center in Santa Fe, Bantayan Island since Dec. 15 as the local government began preemptive evacuation as part of its precautionary measures for Typhoon #OdettePH | Photos from Sta. Fe LGU

Based on initial data from the Provincial Disaster Risk Reduction and Management Office (PDRRMO), a total of 1,863 individuals from 13 localities have been transferred to safer areas as of Thursday morning, December 16.

These included those from Aloguinsan, Pilar, Santa Fe, Sogod, Sibonga, and Tudela. PDRRMO is still verifying the rest of the data as of Thursday.

Most of them were residing in coastal villages, which are exposed to deadly storm surges.

In Santa Fe, at least 66 families residing near the coasts of Hilantagaan Island were evacuated last Wednesday, December 15 to safer areas.

Work in both government and private offices in Cebu province has also been suspended in anticipation of Odette’s arrival.

Gov. Gwendolyn Garcia on Thursday, December 16 ordered the suspension of work in the Capitol which will last until Friday, December 17.

The central and southern portions of Cebu, including Metro Cebu, remain under Tropical Cyclone Wind Signal (TCWS) No. 3, according to the 11 a.m. severe weather bulletin from the Philippine Atmospheric Geophysical and Astronomical Services Administration (Pagasa).

The rest of Cebu, on the other hand, is under TCWS No. 2.

Destructive and damaging wind, with speeds reaching up to 170 kilometers per hour, is expected to prevail in areas under Storm Signals No. 2 and 3.

In addition to canceled sea voyages, more flights at the Mactan-Cebu International Airport (MCIA) were grounded due to threats of Typhoon Odette.

GMR-Megawide Cebu Airport Corporation (GMCAC), in its latest advisory, reported 29 more flights bound to and from Cebu were canceled.

Pagasa estimated that Odette will be making landfall between 1 p.m. and 3 p.m. on Thursday within the vicinity of Siargao-Bucas Grande Islands or Dinagat Islands.

They have also hoisted TCWS No. 4 in several areas in Visayas and Mindanao, including the areas mentioned where the typhoon will make its first landfall.

Pagasa also maintained their earlier forecasts that Odette may hit Central Visayas this evening. More specifically, around 8 p.m. within the vicinity of Ubay town in Bohol.

Its strength has increased from 160 kilometers per hour (kph) to 185 kph in a span of roughly four hours. Its gustiness has reached 230 kph.

Odette was spotted 175 kilometers east of Surigao City, Surigao del Norte as of 10 a.m. on Thursday, moving at a west-northwestward direction at a speed of 25 kph.

39 areas in Cebu placed under Storm Signal No. 3 as #OdettePH further intensifies