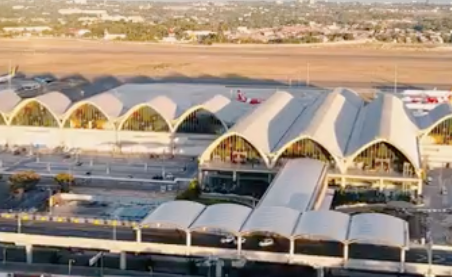 An aerial shot of the Mactan Cebu International Airport Terminal 2.

In a meeting with Cebu Provincial Governor Gwendolyn Garcia, MCIA Authority (MCIAA) officials said they have moved Terminal 1 operations to Terminal 2 due to ongoing rehabilitation works.

“We will resume operations tomorrow (December 19) but we will only resume domestic operations.”

The MCIA will prioritize flights bringing in relief goods to Cebu and nearby provinces.

The MCIA was significantly damaged during Typhoon Odette when the weather disturbance passed through Metro Cebu on Thursday night, December 16, 2019.

The airport suspended operations on December 17, 2021, and partially operated on December 18, 2021, to give way for relief goods.

Neri said another reason they could not cater to international flights immediately is that there are no available rooms in hotels for isolation.

Many locals have checked in hotels because of the lack of power and water supply in their homes. This led to a shortage of quarantine spaces.

Many of the Overseas Filipino Workers (OFWs) who have not received their test results are also stuck in the hotels.

With this, the Department of Health in Central Visayas (DOH-7) has allowed the release of 200 Cebu-residents quarantined in the hotels.

“Those who have been stranded in the hotels who are due already for more than five days can be released to their local government units (LGUs) for continued quarantine and surveillance,” said Doctor Jaime Bernadas, the director of the DOH-7.      /rcg