CEBU CITY, Philippines — There will be no lockdown in Cebu City with the raising of the Alert Status to Level 3 starting January 14 until January 31, 2022.

Mayor Michael Rama said that the city did not see the need for further restrictions as already stated in the Interagency Task Force (IATF) guidelines for Alert Level 3 areas.

A summary of the guidelines is shown in the diagram below: 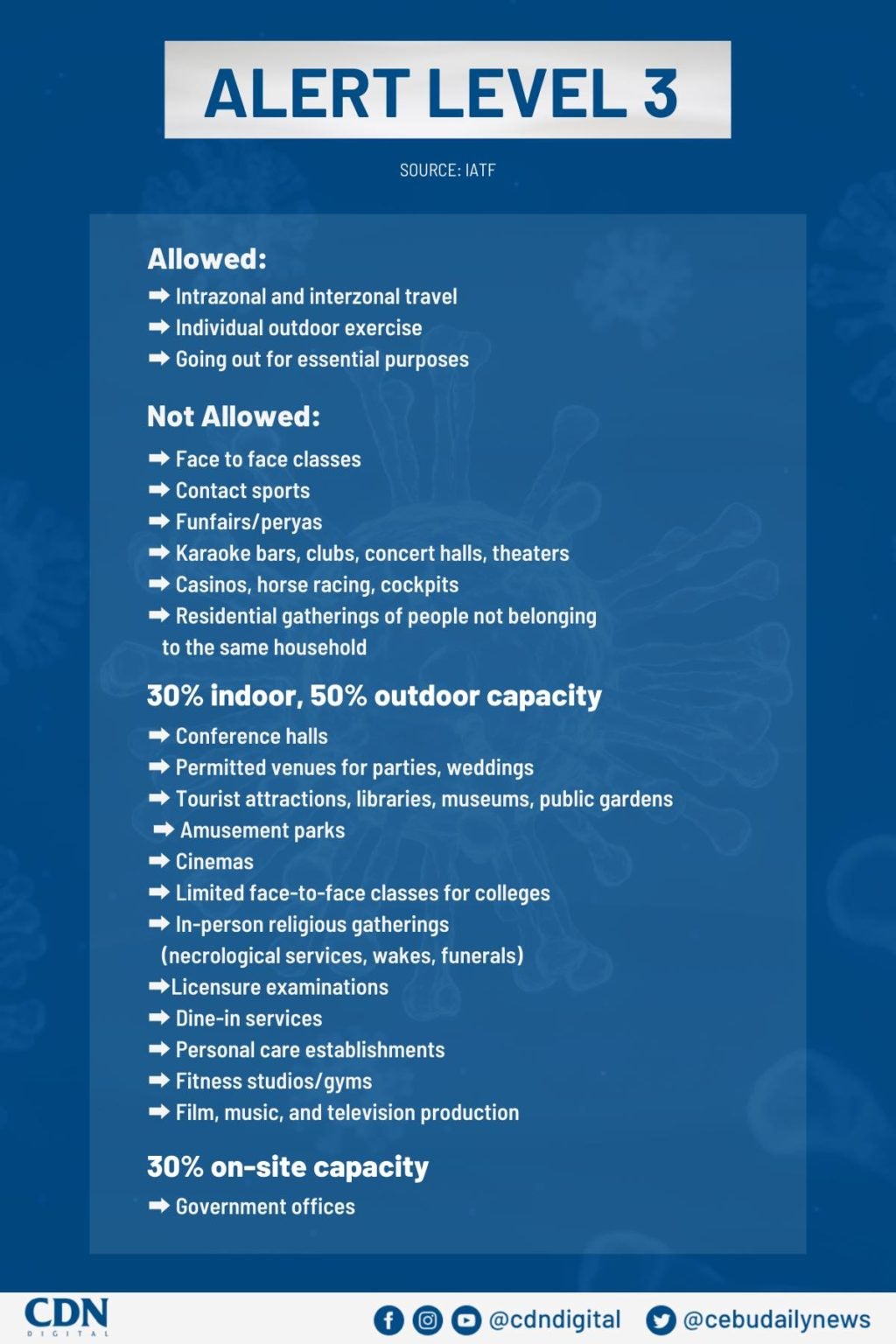 Instead, the city government is strengthening the isolation facilities, temporary treatment and monitoring facilities (TTMFs), hospitals such as the Cebu City Medical Center (CCMC), and most importantly, the vaccination drive.

“If we are going to be too much of being restrictive, unsa nalay mahitabo (what will happen)? As we are now preparing, TTMF, medicine, we will be asking the capital for additional police because we need additional forces,” said the mayor.

Councilor Joel Garganera, deputy chief implementor of the EOC, notes that under Alert Level 3, travelling between zones are still allowed.

Cebu City will not be changing its policies for the entry of travelers in its ports, standing by the status quo that fully vaccinated individuals will only need to present their vaccination cards.

However, Garganera notes that traveling outside Cebu may be a different scenario.

“It will depend on the local government unit (LGU) of destination. We understand if they may have other requirements for travel kay (because) they will also wish to protect their ports of entry,” said the councilor.

Aside from this possible inconvenience, there will not be many changes in the city during Alert Level 3.

No vaccination, no entry

Mayor Rama said that the city would want to restrict the movement of the unvaccinated individuals to prevent them from contracting the disease, but because of the devastation of Typhoon Odette, the people must be able to go out to get their needs.

The Cebu City Police Office (CCPO) said they would be implementing the “No vaccine, no entry” policy in establishments in compliance with the order of the mayor.

Rama had issued a directive prior to the typhoon on the implementation of such.

However, the mayor said on January 13, 2022, that this policy would be implemented with the prerogative given to the establishments.

In the previous directives of Mayor Rama, certain establishments are only allowed to serve fully and partially vaccinated individuals at a certain capacity based on the Alert Level status of the city.

The same guidelines will still be followed by establishments but for the “No Vaccine, no entry” policy, it will be up to the establishments.

The mayor has also noticed that public transportation has been violating the 70 percent capacity rule.

Recently, the Department of Transportation (DOTr) has pronounced that only vaccinated individuals can ride in public utility vehicles (PUVs).

Rama said the city would not be imposing this policy yet considering that the city had not fully recovered from Typhoon Odette.

However, he instructed the Cebu City Transportation Office to strictly monitor the PUVs and apprehend violating drivers or operators.

Read Next
Mangubat on title fight with Suarez: I’m okay being the underdog