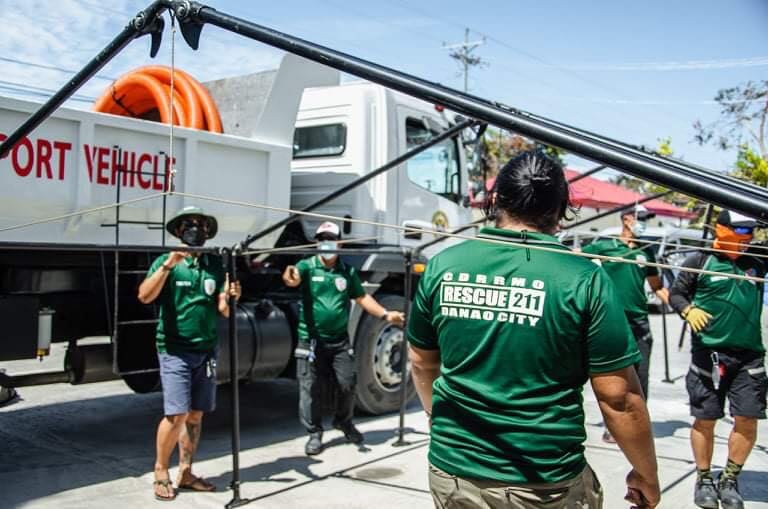 At least 50 disaster and rescue personnel from seven localities in Cebu’s 5th district are now in Alegria town in south Cebu to help expedite recovery and rebuilding efforts there. The Disaster Risk Reduction and Management (DRRM) teams of Compostela, Catmon, San Francisco, Poro, Pilar, Tudela, and Danao City will be in Alegria for five days. They have also brought with them clearing heavy equipment, water trucks, rescue truck, and heavy equipment. | Contributed Photo

CEBU CITY, Philippines – Help continues to pour for Odette-stricken areas in southern Cebu a month since the typhoon battered the island province.

At least 50 disaster and rescue personnel from seven localities in Cebu’s 5th district are in Alegria town in southwestern Cebu to expedite recovery and rebuilding efforts there.

The teams from Compostela, Catmon, San Francisco, Poro, Pilar, Tudela, and Danao City, which arrived last Wednesday, January 19, 2022, will be there for five days.

They have also brought with them clearing heavy equipment, water trucks, rescue truck, and other heavy equipment to aid Alegria in their clearing and rebuilding operations.

The initiative was led by Danao City Government, whose Mayor, Ramon “Nito” Durano III, earlier announced that they will be lending assistance to localities in Cebu province badly hit by Odette.

“Even though my beloved Danao City was not spared from the widespread devastation of Typhoon Odette, I am still thankful to our God Almighty for blessing us with ample resources and manpower that made our city recover this quick. With this recovery, we want to extend our helping hand to other LGUs (local government units) badly hit by Odette and are still in need of assistance,” said Durano in a statement.

In a separate press statement, former Congressman Ramon ‘Red’ Durano VI rallied support from neighboring localities to augment the assistance they will be delivering to south Cebu.

Aside from manpower, the Duranos also donated a total of P200,000 as financial assistance to the local government of Alegria.

Former Tourism Sec. Joseph Felix Mari ‘Ace’ Durano paid a courtesy visit to Alegria Mayor Verna Magallon, wherein he turned over P100,000 as cash aid to help the town get back on its feet.

“We initially extended cash since it was difficult to access the southern towns immediately after Odette. But we’re glad that we’re now able to reach this part of the province and we’ve seen how much help is still needed. During the time sa Yolanda, arang-arang gamay kay adunay ubay ubay nga International Aid. Karon mas lisod samotan pa nga pandemya,” said Ace.

Cebu remains under state of calamity due to the devastation left by Odette. Odette hit central and southern Cebu last December 16.

Canada reports 10 new cases of monkeypox, including the first in Ontario