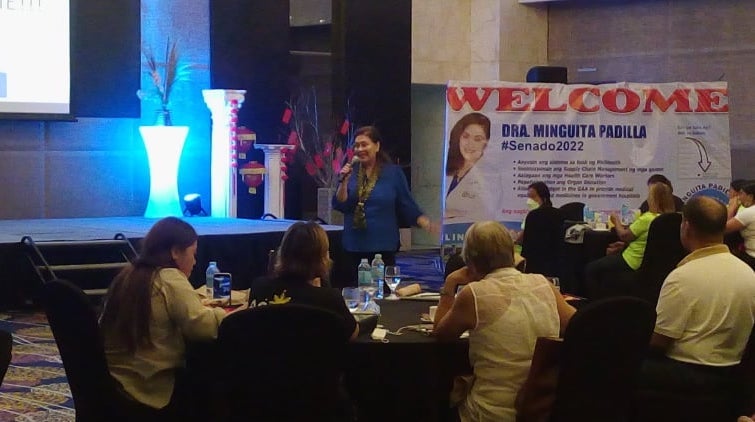 MANDAUE CITY, Cebu — An ophthalmologist and health advocate is seeking the support of the Cebuanos in her bid for a Senate seat in the May 2022 elections.

Dr. Minguita Padilla, president and chairperson of the Eye Bank Foundation of the Philippines, said she would focus on the improvement of health services in the country if she would win in the elections.

Her advocacies include the need to pass a Pandemic Preparedness Act, address the systemic problems at PhilHealth, ensure full implementation of the Universal Health Care Act and care for the health care workers.

“Unless we have a good PhilHealth, we will not have a good universal health care program,” she said.

Also, Padilla said, there was a need to address problems on the supply chain management of medicines and other medical supplies to make these accessible to every Filipino.

Quoting findings of the Commission on Audit, Padilla said, there was no scarcity of medicines and medical supplies in the country.  Many of the supplies were wasted after these reached its expiry dates while kept in storage.

Padilla, who belongs to the slate of Senator Panfillo Lacson and Senate President Vicente Sotto III, was in Cebu during the weekend to meet with mayors, barangay officials and workers.

In these gatherings, Padilla presented herself as an alternative to the veteran politicians while adding that Senate needed a doctor.

She said the last medical doctor to win a seat in Senate was the late Juan Flavier in 2007.

“And then so many things happened which were not good.  It was like we were a chicken without a head. And aside from poor policies, there were also some corruption.  Not only some but blatant [corruption] and I saw [these]. I was in the private sector. We helped the government.  There are so many good people in government but there are also so many bad eggs,” she said.

Padilla admitted that it took a while before she accepted the offer of Senator Lacson to join his Senate slate.  She was also asked by health care workers to give election a try.

While she thinks that she has already done a lot for the country as head of the Eye Bank and for her participation in the government’s pandemic response initiatives among others, she still believes that “there is still a lot that I can do that is why I am taking this chance to run for the Senate.”

Being photographed while giving help makes me cringe, says Lacson

Lacson-Sotto tandem nixes motorcades: How can you talk to people if you’re moving?

Read Next
Diether Ocampo apologizes for car crash, thanks those who rescued him