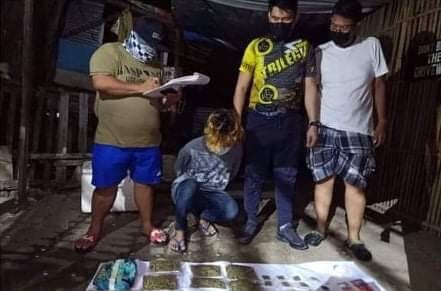 CEBU CITY, Philippines — A 23-year-old man landed in jail after he was caught with 2.5 kilos of dried marijuana leaves, which is worth P300,000, in Barangay Lorega in Cebu City on Saturday dawn, February 12, 2022.

Quilitorio said the dried marijuana leaves had a market value of P300,000.

He said that they started monitoring Datan as part of a followup investigation of previous operations on dried marijuana proliferation.

After monitoring the suspect for a week, Quilitorio said they then conducted a buy-bust operation against Datan.

He said that they only bought a sachet of dried marijuana leaves worth P300 during the operation and they later found out that Datan had more of the illegal items inside his backpack.

These included a large plastic pack of suspected dried marijuana leaves that weighed at least a kilo.

(We only bought P300 worth of dried marijuana from him. When we saw a bag and checked it later, we found a pack kilo [of the dried marijuana leaves]. The other pack were already divided in separate sachets and packs, which already had owners. The other large pack was not divided yet.)

Quilitorio said that based on the investigation, Datan could allegedly dispose of at least a kilo of dried marijuana leaves in a week to the cities of Cebu, Mandaue, and Lapu-Lapu and some areas of Cebu province.

He said that Datan had already been a while in this illegal business.

He also said that the source of the dried marijuana leaves was in Luzon, which they were trying to locate.

(Items will be sent to him through courier express and he will be the one who will dispose of them. He had contact from Luzon…Every week, he could dispose of a kilo. )

( I only confiscated this huge volume of marijuana just now because we felt that it is starting to be out of the market. But we got surprised that marijuana is still existing. Of the huge volume that we confiscated, then this is still in demand.)

Datan is detained at the Parian Police Station pending the filing of charges.

3 nabbed in separate buy-bust operations with P2.1M worth of ‘shabu’