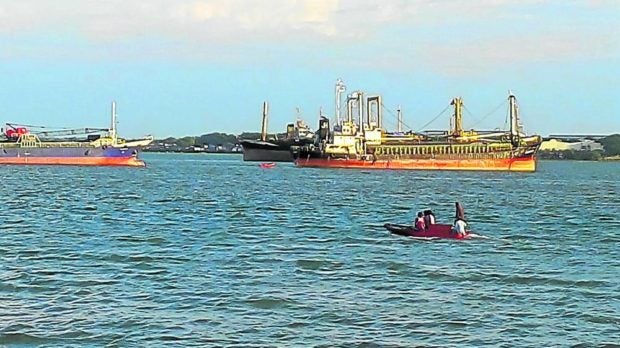 DAILY TOIL: Fishermen go on with their daily activities, unmindful of the vessels on anchorage in the waters off Barangay Tayud in Consolacion, Cebu province. This area is part of the 235.8 hectares that the municipal government is eyeing to reclaim. (CONTRIBUTED PHOTO)

CEBU CITY, Cebu, Philippines — In a few years, Cebu may no longer be that long and narrow island province on Central Visayas’ map. It may just take a new shape as four large reclamation projects have either been approved or are up for implementation by the government.

Environmentalists are worried as these projects, which do not include those proposed by different local governments in Cebu to the Philippine Reclamation Authority (PRA), may pose risks to the province’s rich marine resources.

As of October 2021, two proposed reclamation projects in Cebu had been approved by the PRA: the 400-hectare Mactan Cebu Ocean City in Barangay Buaya, Lapu-Lapu City; and the 131-ha Mandaue City North Reclamation and Development Project.

For implementation are the 5-ha WTCI Port Component Project in Consolacion town and the 100-ha Minglanilla Industrial Park in Minglanilla town.

Once implemented, this would give Cebu, presently covering 508,800 ha, an additional land area of 636 ha.

Except for the port component project in Consolacion, which is private sector-initiated, three are projects of local governments done in partnership with private companies or consortiums.

Based on its website, the Mactan Cebu Ocean City is envisioned to become one of Asia-Pacific’s top five tourist destinations in the next 10 years as it will host “rows” of international luxury hotel-casino resorts, ocean theme parks, sport arenas, and yacht and sailing clubs, among others.

The Minglanilla Industrial Park, worth P20 billion, will be transformed into Minglanilla Techno-Business Park, an integrated mixed-use development that will house light industries, commercial, residential and port facilities.

The 131-ha complex in Mandaue was earlier envisioned to be similar to the Entertainment City gaming hub along the Manila Bay shoreline.

Aside from these projects, the PRA received 23 applications from local governments in Cebu, said lawyer Joseph John Literal, the agency’s assistant general manager for reclamation and regulation.

These applications have yet to include the reclamation projects proposed by private groups, he added. 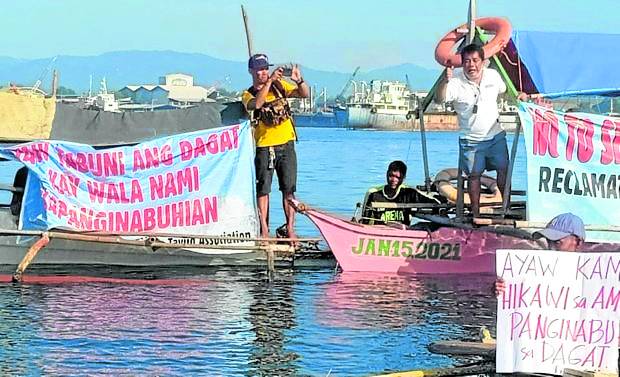 PEOPLE’S SENTIMENT: Residents and fisherfolk in Consolacion, Cebu, in this October 2021 photo, hold a fluvial parade to express their opposition against a reclamation project in their town. (CONTRIBUTED PHOTO)

But environmentalists were concerned by the sheer number of reclamation projects in Cebu, which is known for its beach resorts and rich marine resources.

“It (reclamation) does not only affect the sea. It also has an impact on the mountains where the filling materials are taken,” said lawyer Rose-Liza Eisma-Osorio, legal and policy director of Oceana Philippines, a nonprofit ocean conservation organization.

Eisma-Osorio said that aside from destroying the marine resources, these dump-and-fill projects also ruin the mountains where rocks and soil used to fill the seas are taken.

In the process, reclamation projects will displace not only fishermen but also farmers whose main sources of livelihood depend on the mountains, she said.

“Proponents of reclamation projects don’t take into account marine resources. What they only focus on is the additional land area. Maybe for the short term, we can benefit [from this], but in the long term, we will lose the productivity of the marine resources,” Eisma-Osorio said. 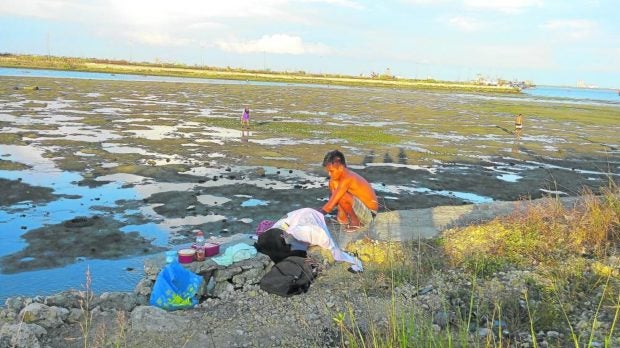 LOW TIDE HUNT: Even at low tide, the area in Consolacion, Cebu, that is planned to be reclaimed yields shellfish that help put food on the table of small fishermen in the village of Tayud. (CONTRIBUTED PHOTO)

Sen. Leila de Lima has sought an investigation, in aid of legislation, of these large-scale reclamation projects, which threaten the country’s coastal and marine ecosystem.

In Senate Resolution No. 956 dated Dec. 6, 2021, the detained opposition senator cited the need to look into the processes being undertaken by local governments in approving these projects and determine their compliance with laws and government regulations.

De Lima cited a position paper of Oceana arguing that the country’s reputation as the center of marine biodiversity, being at the apex of the so-called Coral Triangle, might be lost due to the “wholesale” approval of these reclamation projects.

“According to the position paper, reclamation projects hide behind the promise of economic progress and infrastructure development at the expense of the environment, as well as the socioeconomic welfare and livelihoods of many marginalized Filipinos, especially our fisherfolk. These projects cause irreversible damage to environmental, socioeconomic and cultural identities of the people,” the senator said.

“What are at direct risk in all these dump-and-fill projects are the food security and self-sufficiency of coastal residents, especially the municipal fisherfolk and other sectors whose livelihood are directly dependent on the fisheries and aquatic resources of their prime fishing grounds,” she added. 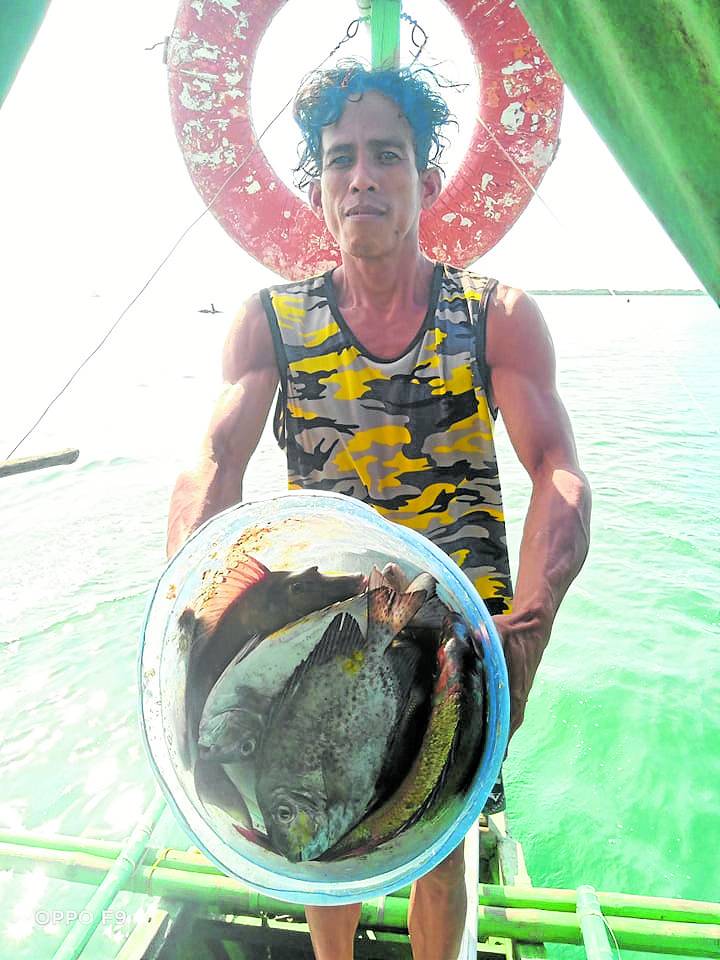 DAY’S CATCH: A Consolacion fisherman shows his catch to disprove claims that the area eyed for a reclamation project is not rich in marine resources. (CONTRIBUTED PHOTO)

The senator, citing the position paper, said these projects were introduced without adherence to requirements of regularity, transparency, accountability and participation by public and private proponents, indicating the propensity of local governments and their officials of railroading the approval process.

Oceana is also working on implementation of policies to make sure government agencies approving or implementing coastal development projects are fully compliant with environmental laws.

This includes Senate Bill No. 1082 filed in October 2019 by Sen. Nancy Binay, which sought to establish the “National Coastal Greenbelt Action Plan” to reduce the impacts of cyclones on coastal communities with an environmentally friendly and cost-effective initiative.

Coastal greenbelts are strips of natural or planted coastal vegetation, stretching at least 100 meters in width from the sea toward land, primarily of mangrove and beach forest species, which are designed to prevent coastal erosion and lessen the adverse impacts of natural coastal hazards on human lives and property.

“Coastal greenbelts are important, especially for resiliency against climate change and safeguards against these kinds of coastal projects. These are the kind of reforms we want, so we can continue to protect our remaining mangroves and other marine resources,” Eisma-Osorio said.