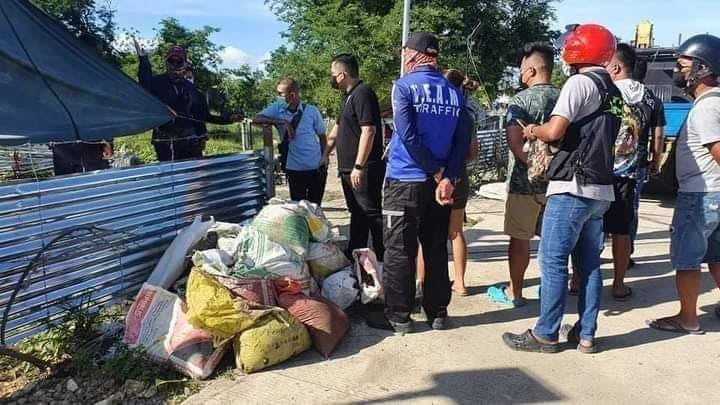 Personnel from Mandaue City Hall went to the area near Pajara Park underneath the Marcelo Fernan Bridge on Tuesday afternoon to check out reports that some private entities have claimed ownership of the property that rightfully belongs to the Mandaue City government.   | Photos courtesy of Mandaue City Councilor Anjong Ouano- Icalina

This was the assertion of lawyer John Eddu Ibañez, the executive secretary of Mayor Jonas Cortes, on the issue of ownership of the said property.

Ibañez said the area is a foreshore land owned by the city government under Republic Act 5519 (Charter of the City of Mandaue).

Ibañez issued the statement after some entities allegedly claimed that the area is private property.

On Tuesday afternoon, personnel from the city government went to the area after they received reports and complaints from concerned individuals that some people have put up signage that the area was private property and prevented entry to outsiders.

A fisherman who has lived in the area for 20 years, said he was one of those who was also called up by the guards.

The fisherman admitted that they were a bit nervous about the presence of security guards and was relieved after the government dismissed them.

He said the private individuals have been in the area for about a month now but it was only recently that they have become stricter in prohibiting others access to the area. He said there were at least 2 to 3 guards per shift who would secure the area.

The area has been open to the public. It is where residents swim, fish, and pick seashells.

Ibañez said they don’t know who is deploying the guards since the latter won’t tell them, refused to show their IDs, and only have guns with them.

He said when he asked them about the title of the land, they would only say that they will have to ask their head or their employer.

“If you are claiming a certain property, you give your title, kinsay nagtag-iya ana, musulti ka, muanhi kag city hall,” Ibañez said.

Ibañez said the lot owned by the city government in the area was about 2 to 3 hectares.

He said the area is even included in the 131 hectares Mandaue City North Reclamation and Development Project.

Currently, the city government has already put barricades and soon will be putting up a gate to deter other individuals from going inside the property.

The city has also deployed personnel from the Mandaue City Police Office and Mandaue City Enforcement Unit in the property which will be temporarily opened to the public.

Ibañez said they will not be filing a case against the guards this time because they left the area when told to and were just following orders. But if they will come back and tear down the barricades, then that’s another story Ibañez said.

Ibañez said Mayor Cortes will be meeting the civil registrar, registrar of deeds, National Bureau of Investigation, and the police to know who are the people claiming the area.    /rcg