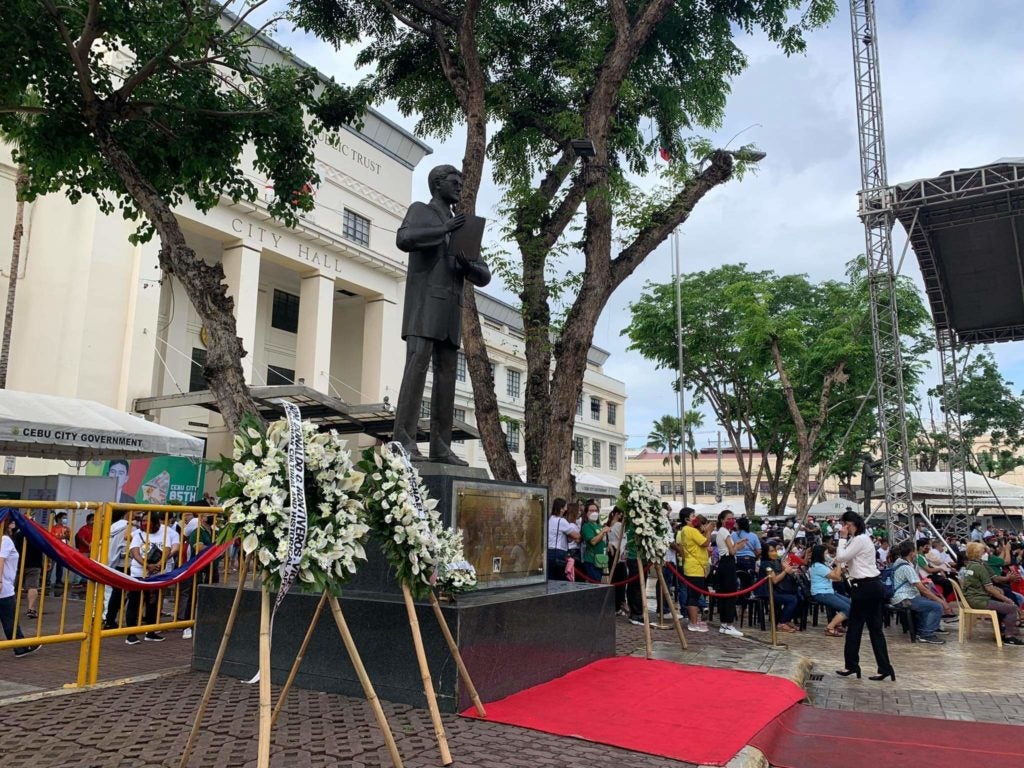 Wreaths laid at the statue of Don Vicente Rama on Charter Day 2022.

CEBU CITY, Philippines — As Cebu City celebrates its 85th Charter Day, it has not forgotten the man who made its cityhood possible: Don Vicente Rama.

His grandson, Mayor Michael Ram, certainly has not forgotten to pay tribute to his family’s patriarch on this momentous day.

On February 21, 2022, the city government opened a small exhibit showcasing the life of Don Vicente Rama.

The exhibit showcased the portrait of the Don, the image of the signing of the Cebu City charter, many of his hand-written works, and even his desk and chair used long time ago.

On the actual Charter Day, February 24, 2022, Mayor Rama, Cebu Governor Gwendolyn Garcia, Vice Mayor Donaldo Hontiveros, and the rest of the city officials laid wreaths of flowers at the statue of Don Vicente in Plaza Sugbo.

In an interview with CDN Digital, Mayor Rama said that he was two years old when his grandfather died.

He personally could not remember much about him, but he was told how much he loved to tail around his grandfather.

While showing CDN Digital the home of Don Vicente still standing in Barangay Basak-San Nicolas, Rama said that he was surrounded by the Don’s memory all throughout his life.

“I have lived in this house for 20 years. All the books deposited dinha until gipang donate na. Kung mosturya kag memories of Lolo, while I was still in the womb of Mama mao ni iyang giistorya.”

Historian Clodoveo Narcoda said in his lecture on the life of Don Vicente on Charter Day that the don was commonly known as “Nyor Inting.”

The Don was a determined politician from his early career as a municipal councilor in 1916 to his senatorial career in 1947.

Don Vicente saw a lot of protests during the time he filed the bill for the cityhood of Cebu, but he prevailed.

For his courage, today is he remembered as the Father of Cebu City Charter.

One of Don Vicente’s descendants, Councilor Eduardo Rama, Jr., said the life of their patriarch must be emulated by modern Cebuanos.

“As an assemblyman, my great grandfather, Don Vicente Rama, fought to realize Cebu’s cityhood. He persisted because Cebuanos are worth devoting his life to. It was true 85 years ago, and is still true 85 years later,” said the councilor.

He urged the Cebuanos that amid the challenging times, they should all look up to Don Vicente who showed perseverance.

The Rama clan also expressed gratitude to Cebuanos for the continuous support and trust to their family as they also continue to serve the public.       /rcg

Mandaue City to give Charter Day incentives to its employees

No Charter Day bonus for Oponganons