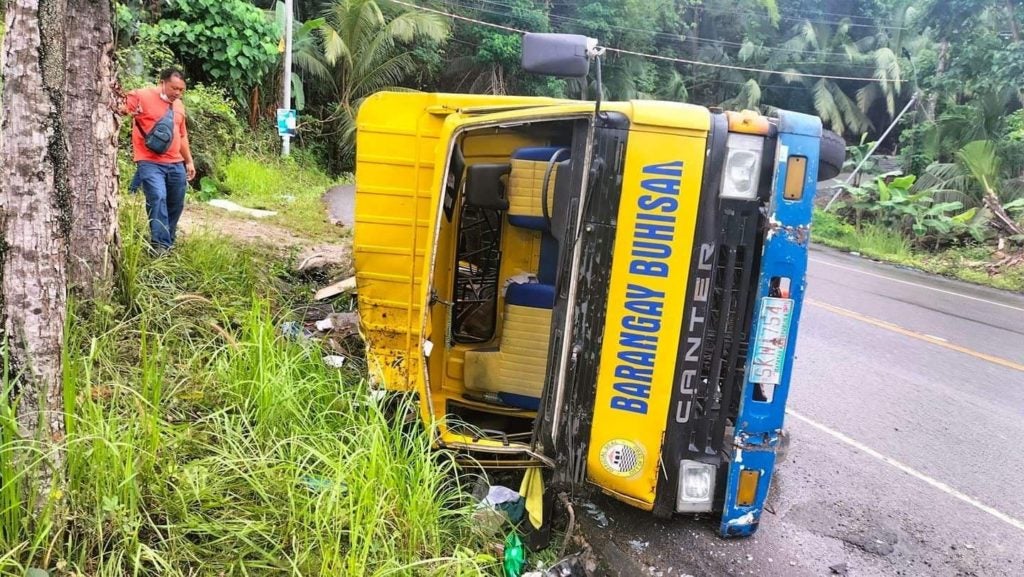 NAGA-ULING ACCIDENT. A minibus, which is owned by Barangay Buhisan, Cebu City, falls on its side after the driver lost its brakes and control of the vehicle this morning, Sunday, March 6, 2022 along the Naga-Uling Road. Three were seriously injured in the accident. | Contributed photo via Paul Lauro

(UPDATED) CEBU CITY, Philippines — At least 12 individuals were injured, three of whom were reportedly in critical condition, in a road accident in Naga City on Sunday morning, March 6.

The Naga City Police Station confirmed that a village-owned bus from Cebu City figured in a road accident along Naga-Uling Road around 7 a.m. on Sunday.

Police Staff Sergeant Aristeo Tampus said the bus driver, identified as Virgilio Berdin, lost the brakes and control of the bus when they were traversing the Cebu City-bound lane of the highway. Berdin, 75, was among those reported to be critically injured.

The bus was a property of Barangay Buhisan.

Tampus added that Berdin attempted to keep the bus on the lane when the brakes’ rubber cap exploded. But due to the sharp curves of the road, the driver lost total control of the bus, causing it to fall on one side.

The vehicle was carrying a total of 11 passengers. All of them were acquaintances, and were headed back to Cebu City from an outing in a resort in Pinamungajan town in southwestern Cebu.

Aside from Berdin, two other passengers, both 18 years old and male, also sustained severe injuries and remain under critical condition, the police said. The remaining eight passengers only sustained minor injuries.

(The serious (injuries) were on those three. The others were just minor ones.)

Naga City is a fifth-class component city located approximately 25 kilometers south of Cebu City. Naga-Uling road is the highway that connects it to neighboring Toledo City in the west.