What raising the age of sexual consent means 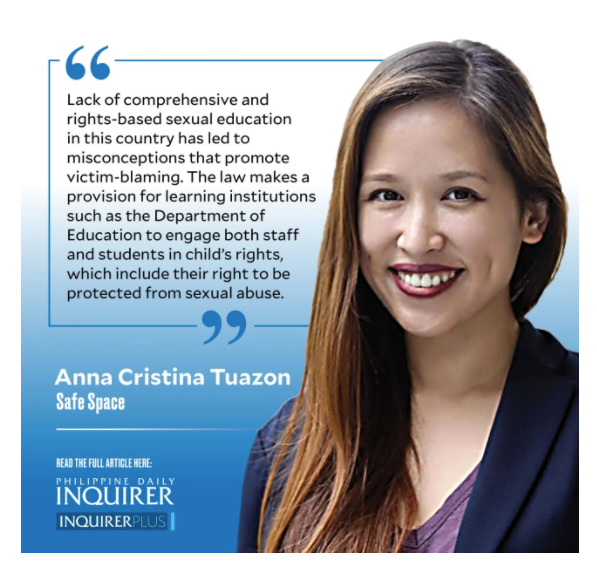 Republic Act No. 11648, signed into law on March 4, raised the minimum age of sexual consent from 12 to 16 years old to protect minors from rape and sexual abuse. This is long overdue; our country was, up to now, infamous for having the lowest minimum age of consent in Asia and one of the lowest worldwide. Forcing children to bear the legal burden of proving lack of consent has made us a relatively safe haven for sexual predators. Our disproportionate emphasis on keeping the “nuclear family” together has led to past court case decisions that force the child to bear her rapist’s children and to cohabit with him. All this tragedy and injustice, due to the illusion that the child has given sexual consent.

Our country is in a longstanding child sexual abuse epidemic. Seven out of 10 rape victims in the Philippines were children, according to a joint 2015 study by Unicef and the Center for Women’s Resources. One in five children ages 13-17 reported experiencing sexual violence. Hopefully this law is only the beginning in a series of reforms that will make it more possible for us to protect children. Raising the age of sexual consent will not solve or prevent all abuses but it can help dismantle the pervasive culture of victim-blaming in this country.

One of the pillars of victim-blaming is the misconception that the victim has consented to the crime. The justice process for sexual crimes seems, well, unjust. It is one of the very few crimes that place burden on the victims to prove nonconsent. Other violent crimes do not seek such proof. Imagine asking someone who was physically assaulted to show proof that they did not consent! Other types of consent, for example to medical treatment, place the burden of proof on the treatment provider and not on the patient. Adult victims of sexual violence and abuse already go through a painful and retraumatizing process having to prove that they did not consent—what more for children?

When working with children who were victims of sexual abuse, it is common to hear experiences of confusion, guilt, and shame. Children go through the psychological process of “magical thinking,” the belief that their actions have directly caused what is happening around them. This is a developmental process as the child learns how to process and interpret the world around them. Magical thinking is the reason why children often think that they have caused their parents to separate or have caused a loved one to die. In grief work, we help children clarify these misconceptions to alleviate unnecessary guilt and shame. It is the same with sexual abuse. Children are developmentally disposed to erroneously think that they have somehow caused this to happen. It doesn’t help that they hear messages that align with such thinking—parents and family members that, in shock and disbelief, react with anger and get upset toward the child for “letting it happen” or “not telling us sooner.” It becomes even more complicated when the perpetrator is a family member, lending a conflict of interest for the guardian who sometimes chooses to prioritize the harmony of the family over the protection of the child. We need to counter magical thinking by emphasizing first and foremost that they didn’t do anything wrong and that it is not their fault. Any other remarks that muddle this message will only exacerbate magical thinking and increase guilt and shame.

Another developmental factor that can contribute to self-blame is the capacity to differentiate physiological response from voluntary consent. Children (and adults, for that matter) do not know that bodies can respond involuntarily, even without their consent. They do not yet understand the biology of sexual sensations and, with magical thinking, assume that they have caused their body to feel this way and confuse this with consent or “liking it.” Thus, therapy work with children involves helping them sort their experiences to minimize such confusion. Aside from biological miscues, children can also confuse seeking approval from the adult, a value we have often encouraged as a society, as giving approval to the act. Their lack of power in adult-child relationships renders it difficult for them to exercise genuine consent. Raising the age of sexual consent will hopefully dismiss any arguments that the child “chose to do it,” or worse, that they “wanted it.”

Unfortunately, it is not only children who suffer through this complex psychological process of sexual trauma. A significant number of adult victims also falls prey to a sense of guilt and shame. Lack of comprehensive and rights-based sexual education in this country has led to misconceptions that promote victim-blaming. The law makes a provision for learning institutions such as the Department of Education to engage both staff and students in child’s rights, which include their right to be protected from sexual abuse. I hope that this law marks the beginning of a cultural shift in how we think about sex, consent, and abuse.