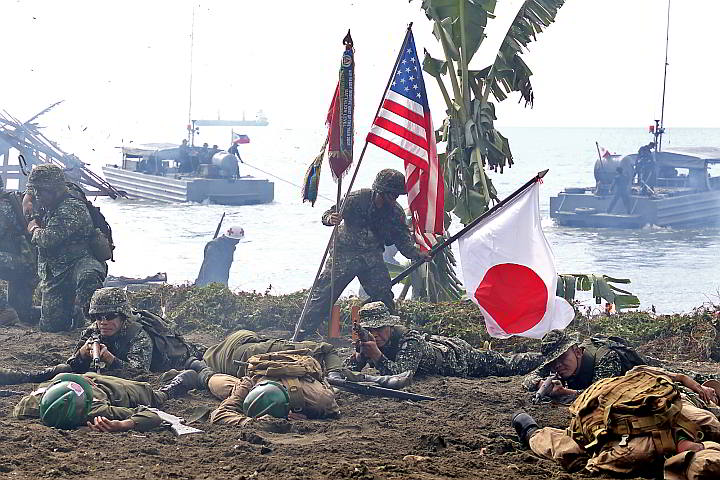 Navy men and students in the roles of American liberators and Japanese soldiers reenact the 1945 landing of US troops on the shores of Talisay City 77 years ago.          (CDN PHOTO/JUNJIE MENDOZA)

The tournament will be one of the highlights of the annual celebration of the “Takas sa Talisay! Kagawasan sa Sugbo,” which commemorates the American landing on the beaches of Talisay during World War II.

The beach volleyball tournament also serves as the focal point of the city’s revival of its sports activities after two years of being stalled by the Covid-19 pandemic.

In an interview with CDN Digital, Talisay City Sports Commission executive, Jeanette Villagonzalo said that they coincided their beach volleyball tournament with the annual commemoration of the American Landing tomorrow.

The tournament will have three divisions, the men’s women’s, and LGBTQ, with four teams competing in each division.

The LGBTQ division meanwhile will have Sea Creatures, Sisterakas, Barbaric, and Hormones as the competing teams.

In addition, there will be lawn tennis and skimboarding competitions happening on the same day while the Poblacion beachfront will feature various watersports activities such as free jetskiing, bangka, and yacht rides for everyone.

Gullas will lead the “Takas Sa Talisay” program tomorrow at 8:00 AM while the beach volleyball tournament starts at 1:00 PM.     /rcg

Why is a beach trip always a good idea? Read on

Read Next
Ruffa Gutierrez posts a cryptic message: ‘Be kind to everyone, including your ex’

Pagasa: Rainy Thursday in the Visayas, Bicol region, Zambo Peninsula due to LPA