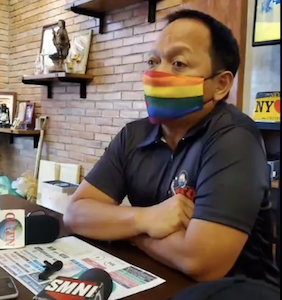 CEBU CITY, Philippines —The Cebu City’s Emergency Operations Center (EOC) has registered the lowest positivity rate since the start of the year.

Councilor Joel Garganera, deputy chief implementer of EOC, announced that on March 28, 2022, the daily positivity rate dropped to 0.20 percent, which was way below the pandemic threshold of the World Health Organization.

“For the last 32 days nato we’ve been enjoying a decline and a steady threshold kay in fact karon aduna na lang tay 104 ka kaso. Just imagine way back January 22 we had more than 7,000,” said Garganera.

(For the last 32 days, we’ve been enjoying a decline and a steady threshold because, in fact, now we only have 104 cases. Just imagine way back January 22 that we had more than 7,000 cases.)

He said that they tested 488 individuals last weekend and only 1 yielded a positive result, leaving the city with only 104 active cases.

Garganera also noted that yesterday, they have only recorded a 0.65 daily positivity rate and all of these were recorded under the Alert Level 1 status of the city.

In the wake of changes unfolding in the city, it’s unclear whether the enormous crowds and other gatherings, such as the one that occurred last weekend during the “Arat na Cebu” festival, would contribute to the jump in cases.

However, Garganera said we should have faith in each other as the city could not be “forever” restrictive.

“All these activities political gatherings, concert kaning mga (these) bars and restaurant, church, we’ll see because we cannot forever be restrictive. We have to put faith in each and everyone of us,” said Garganera.

Furthermore, Garganera said he believed that the pandemic was entirely dependent on people’s behavior, and that a surge would occur if individuals would ignore safety and health regulations.

“If people are just compliant, wa gyud na’y problema, kung naa man gani ta’y dagkong event (if we have big events then that won’t be a problem) have faith but protect yourself,” said Garganera.