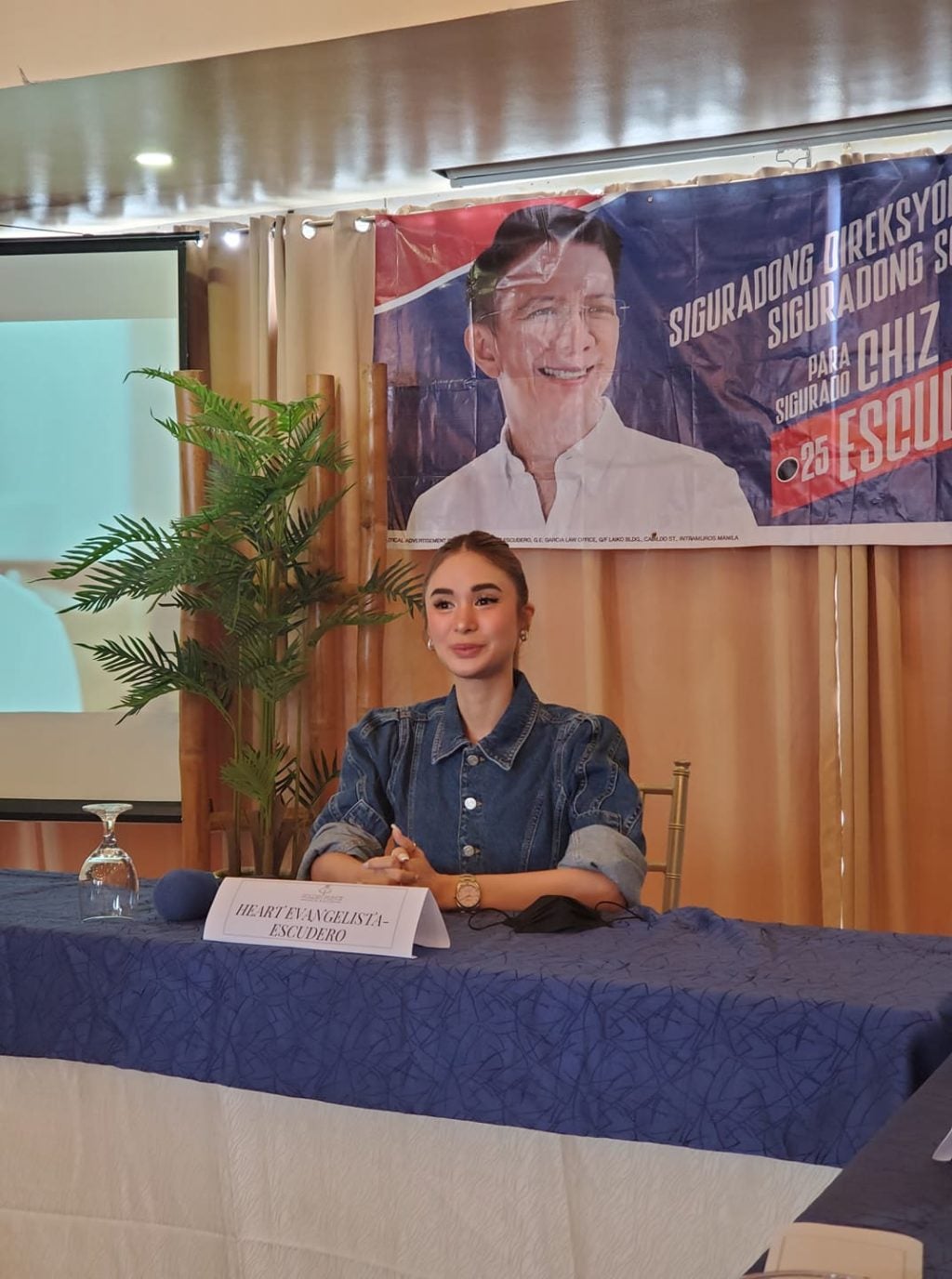 Heart Evangelista-Escudero campaigns in Cebu for her husband, Chiz Escudero, who is running for a Senate seat in the coming elections. | Jewil Anne M. Tabiolo

Evangelista arrived for a press conference at a hotel in Cebu City after her appearance in the streets of Carbon Public Market early in the morning, saying it was the most fun experience in the campaign trail.

Despite a short-trip in Cebu, Evangelista seized the occasion to announce formal support to her husband, Chiz Escudero who will be seeking a return for a Senate seat in the May polls.

Escudero is an incumbent governor of Sorsogon province and is currently eyeing for a senate comeback under the banner of Nationalist People’s Coalition (NPC).

“Sakaling mabigyan siya ng pagkakataon na bumalik sa Senado. (He is hoping to be given a chance to go back to the Senate.) There are a lot of things that he wants to do as well so I hope he’s given a chance,” said Evangelista.

Among Escudero’s platforms, she stated, are to emphasize and promote micro, small, and medium enterprises (MSME), the country’s agriculture industry and as well as the tourism sectors.

Escudero has yet to endorse any presidential aspirant which Evangelista said that picking for one is a long and difficult process, just as it is for the public.

“This is a great moment that we can all actually decipher and we should be free to really study each one, wag tayong magmadali, (let us not be hasty) again we all carry certain colors but pagdating ng halalan (but when it comes to the elections) I think what’s important is we do carry the colors of our flag,” said Evangelista.

Evangelista, on the other hand, stated that she is currently preferring one presidential candidate but has not disclosed any name.

(There is someone I like but again I am not in a hurry to decide.)

When asked of her role in Escudero’s Senate career given if he wins in the elections, Evangelista joked about going back in the “sidelines”.

“I feel that Chiz is a great man and I’ll always support him, hindi rin naman ako mapolitika(I’m not really into politics)…I’ll just support him the way that he supports me tsaka okay lang din yung busy siya para pwede din akong maging busy (and it is okay if he is busy so that I will not also be busy),” said Evangelista.

Netizens couldn’t get enough of Heart Evangelista, who has made a name for herself in the couture industry and who has been busy traveling to the world’s fashion capitals, such as Paris Fashion Week.

Lastly, Evangelista admitted that starting a political career sounds far-fetched at the moment, saying everyone is born with a different purpose and path in life.

“Not for me… I feel that I am very privileged and blessed enough that I was given this platform where I’m at and I could actually use this platform to help and create awareness for certain advocacies, to make a stand for certain things and I think that’s enough for me,” said Evangelista.