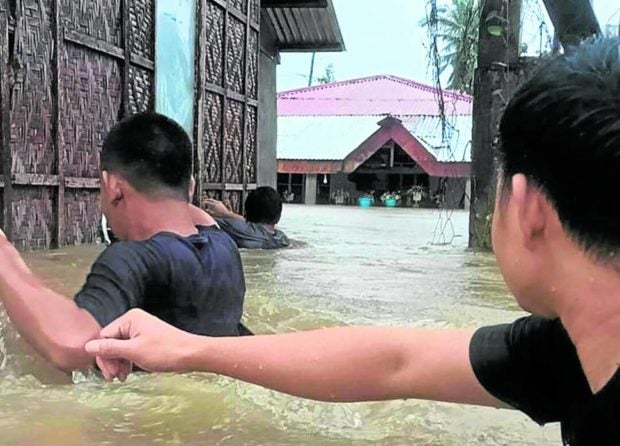 From a tropical storm, Agaton (international name: Megi) has weakened into a tropical depression, but not before heavy rains pounded parts of the Visayas and Mindanao, leaving at least 25 people dead and eight missing.

On Monday, authorities recovered the bodies of 22 people who were buried alive in three barangays in Baybay City, Leyte, a day after their houses were covered by mud and boulders loosened by incessant rainfall.

At press time, the victims’ names had yet to be released by the city government.

The agency said in a statement that the deaths were still being validated while it was waiting for an official report on the causes.

Seven persons were also reported missing in two villages in Baybay City, which bore the brunt of Agaton.

Six of the victims were reportedly hit by a landslide in Barangay Can-ipa while the seventh was the son of the Visayas State University president who was last seen on a beach in Barangay Guadalupe on Sunday.

As of Monday, information was scarce from Baybay as power and communication lines in the city remained down.

Michael Ligalig, spokesperson for the National Grid Corporation of the Philippines (NGCP) in Ormoc City, said that parts of the provinces of Leyte and Southern Leyte were without electricity.

Bohol’s power supply was also affected after NGCP towers in Leyte toppled due to landslides. Bohol has no power source of its own and relies heavily on the power supply from the Leyte grid.

Betty Martinez, NGCP spokesperson, said it would take days to restore the connection.

The Philippine Coast Guard reported that 552 passengers were stranded in various ports in Southern Leyte and Northern Samar provinces because of travel restrictions.

Cebu City Mayor Michael Rama, meanwhile, declared a “state of calamity” in the city on April 10, due to persistent rains dumped by Agaton.

In Iloilo City, 15 villages were flooded as of Monday afternoon, according to a report from the city’s Disaster Risk Reduction Management Office.

As of 4 p.m. on Monday, Agaton was packing maximum sustained winds of 45 kilometers per hour (kph) near the center and gusts of up to 60 kph. It is forecast to weaken into a low pressure area by Wednesday night as it interacts and assimilates with Severe Tropical Storm “Malakas.” —WITH REPORTS FROM ROBERT DEJON, DALE ISRAEL, CARLA GOMEZ, NESTOR BURGOS JR., LEO UDTOHAN, FRANCES MANGOSING AND JULIE AURELIO

#AgatonPH: No classes in entire Cebu on Apr. 11

Read Next
Don’t look back