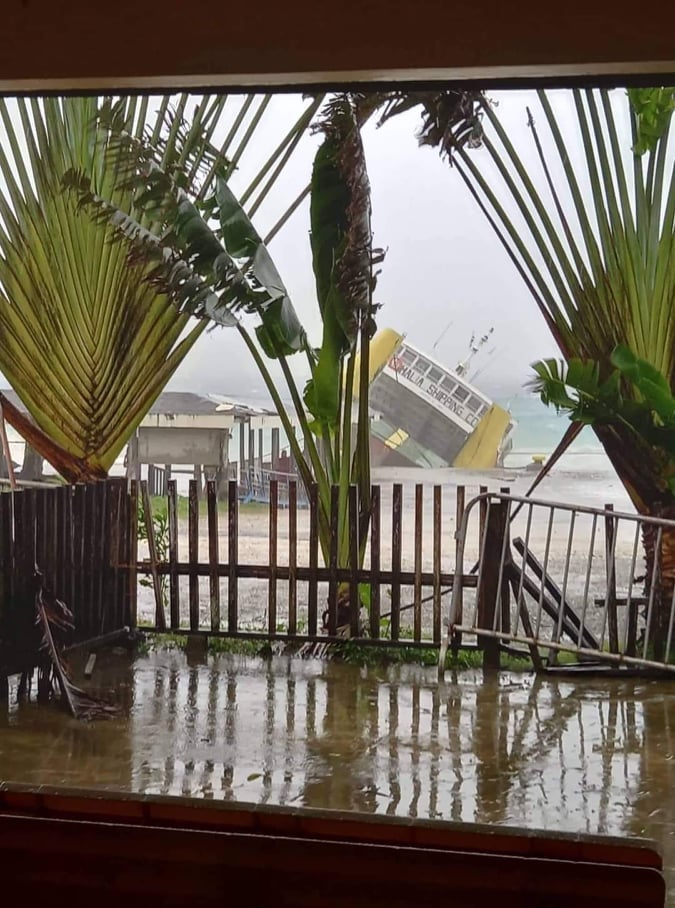 The Philippine Coast Guard in Central Visayas has confirmed that a roll-on-roll-off (roro) vessel of Jomalia Shipping Corp. has been tilted and left half submerged at the Consuelo Port in San Francisco town, Camotes Island after big waves brought by Tropical Depression Agaton battered the area. | Photo courtesy of Jonah Mar Funda Bolaño

CEBU CITY, Philippines – At least 20 localities in Cebu are now under Tropical Cyclone Wind Signal (TCWS) No. 1 as Tropical Depression Agaton (international name: Megi) continues to bring rains in most parts of Visayas.

In its latest severe weather bulletin at 5 p.m. on Sunday, April 10, the Philippine Atmospheric, Geophysical and Astronomical Services Administration (Pagasa) hoisted Storm Signal No. 1 in the towns of Tabuelan, Sogod, Catmon, Carmen, Compostela, and Liloan, and Danao City.

This development puts the total number of localities in Cebu under TCWS at 20.

Agaton is the first major weather disturbance that entered the country this year.

It has maintained its strength of 75 kilometers per hour (kph), with gustiness reaching up to 105 kph, as it moves in a westward direction slowly, Pagasa said.

As of this writing, there are no reported fatalities in Cebu due to Agaton.

Close to 300 passengers stranded in Cebu due to #AgatonPH

Signal No. 2 in parts of Samar, Dinagat Islands as ‘Agaton’ intensifies into storm