Obiena posted a copy of the the Credit Notice from COA dated March 31, 2022, stating the liquidation of his funds have been cleared by the Philippine Sports Commission (PSC) and the no Notice of Suspension or Notice of Disallowance have been issued.

“CLOSURE,” wrote Obiena on Facebook on Friday. “5-months long of events have finally come to a close.” 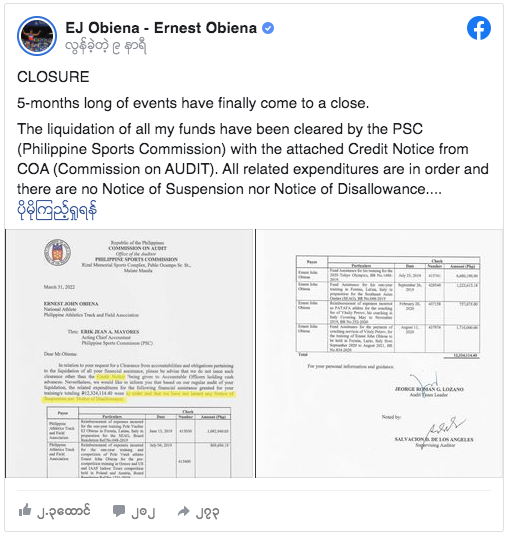 Obiena and Patafa have finally mended ties last March 30 through the PSC-led mediation after the messy rift that had dragged for months.

The 2020 Tokyo Olympian, who is training in Italy, is looking to finally focus on the upcoming 31st Southeast Asian Games in Hanoi, Vietnam on May 12 to 23, where he eyes his second straight gold medal.

Obiena was initially left off the SEA Games roster but the resolution of his issues with Patafa has allowed him to compete in sanctioned events anew.

“We now have closure. I would like to be back and focus on training and competing for the country with my teammates in PATAFA and its officials.  We now eye with 100% focus the upcoming SEA Games. We will do our very best to represent the Philippines,” Obiena said.